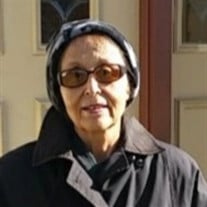 In the early morning hours of Sunday, January 17, 2021 angels greeted Martha Rogers with open arms into her Heavenly home. Martha's earthly journey began Oct. 24, 1935 in Lawton, blessing the home of her parents, Norman and Ivy Hendrix. Martha had many adventures in Gracemont, while growing up with her siblings, Joyce, Judy and Yoeman. Upon the accomplishment of her high school academics in 1954, from Gracemont High School, Martha continued her educational endeavors at Haskell Indian Nations University in Lawrence, Kan. After the successful completion at Haskell, Martha took hold of an opportunity to expand her world, and moved to San Francisco, there Martha worked at the Bauch and Lomb Optical Company for many years. Once again adventure called and Martha found herself moving from the Pacific Coast to the Atlantic Coast. It was there in Washington, D.C. at the Smithsonian Zoo that Martha found her place, her purpose. Martha has always had a love for animals, and here she excelled in her job and was placed in a supervisor position, which she led until her retirement. The joy of being around the animals made the trip from her home in Hagerstown, Md. to D.C. worth every mile. Martha delighted in learning and sharing her Wichita heritage along with other native peoples. She believed in knowledge being essential to being successful. Martha found joy in a modest lifestyle, the sense of accomplishment found in hard work, whether it was in the garden or keeping her home clean and cozy. Martha also found great joy in watching and attending the accomplishments of her nieces, Thomasine, Edwina, Judith and Iva along with her nephews, J.J., Kenneth and Nevin. Her joy continued on as she watched and learned more about her great-nieces, Erika, Kariss, Sierra, Whitney, Rylee and Blakely, including great-nephews, Michael, Jasper, Justin, Johnathan and Bryce. Martha's other love was for the miraculous simple, most innocent, most trusting, intelligent and caring of God's creations, his animals. Therefore in lieu of flowers, memorial contributions should be made to the Smithsonian Zoo. Along with the angels to greet Martha were her parents, Norman Hendrix and Ivy Ross Hendrix; two sisters, Joyce Patton and Judy Pino; a brother, Yoeman Hendrix, and four nephews, Jay Jonathan Reichard, Kenneth Glade Patton, Raphael Nevin Pino and Nevin Pino. Martha will live on in the thoughts and hearts of her remaining family, Thomasine Ross of Anadarko, Brandy Cordova of Albuquerque, N.M., Joey Salazar, Alyssa Salazar of Albuquerque, Michelle and Gabriel Rodriguez and family of Rio Rancho, N.M., Edurna Gayle and Marty Post of Ponca City, Jasper Brett Morse of Richardson, Texas, Justin Lee Nesiba of Ponca City, Judith Marie Circles and husband Walter Loyed Circles Jr. of Anadarko, Johnathan Jarrett Circles of Anadarko, Iva Rose Pino of Broken Arrow, Erika Dunson of Albuquerque, Kariss Dunson of Broken Arrow, and Sierra Jade Shumate of Broken Arrow. We would like to invite you to Ray & Martha's Funeral Home in Anadarko, Thursday, Jan. 21, between 9 a.m. and 8 p.m., to take a moment and thank Martha for the time we had with her, and to bless her on her next adventure. Arrangements are under the direction of Ray & Martha's Funeral Home of Anadarko, OK.

The family of Martha Rogers created this Life Tributes page to make it easy to share your memories.