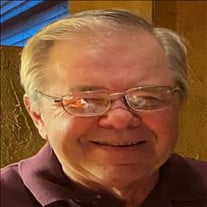 Mark Wesley Johnson, 61, passed away on February 1, 2022. Mark was born on November 8, 1960 (the night John F. Kennedy was elected as President). Mark attended Carnegie Public Schools graduating CHS in May, 1979, then attended SWOSU, Weatherford, Oklahoma, graduating 1984 with a B.S. in Allied Health Administration. He returned to the farm to pursue his passion for farming and managing a successful cow/calf operation with his parents. Mark worked the night shift at Delta Faucet in Chickasha as an Assembler from 1996 until the plant sold in 2006. He then became the Farm Foreman at Windy Meadow Farm in Edmond where he worked until March, 2021. Mark went to work for Allen Farms in Purcell as a Seasonal Farm Laborer. Mark was passionate about the Lord, farming, and his home in Carnegie where his happiest memories were made. He is survived by a brother, Mike Johnson, wife JoAnne, of Oklahoma City, a sister, Rhonda Rowland, husband Glenn, of Stillwater, nieces Jenny Brewer of Oklahoma City and Rebecca Simmons, husband Brandon of Milton, Georgia, nephews Jason Rowland, wife Aimee of Stillwater, and Todd Rowland, wife Sara of Edmond, and nine great nieces and nephews. Mark was preceded in death by his parents, LaVerne & Wanda Johnson. Services will be held at First Baptist Church, Carnegie, OK on Wednesday, February 9 at 2:00 p,m, In lieu of flowers, please make a donation to First Baptist Church, Carnegie, OK

The family of Mark Wesley Johnson created this Life Tributes page to make it easy to share your memories.