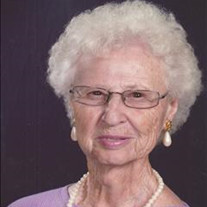 Marilyn Loreda Scott, 84, of Hobart, Oklahoma passed away peacefully with her family by her side on January 23, 2020 at Mercy Hospital in Oklahoma City, Oklahoma. She was born on September 17, 1935 to Roy and Nellie (Albright) Bourne in Gotebo,... View Obituary & Service Information

The family of Marilyn Loreda Scott created this Life Tributes page to make it easy to share your memories.