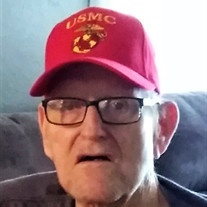 Loyal Lee Waitley, 79, of Anadarko, OK the Lord called him home on October 25th, 2021, after many years of illness at Comanche Memorial Hospital, Lawton, OK. He was born December 31, 1941, in Independence, Missouri to John Lesley and Neoma Ella (Gilbert) Waitley. He grew up in the Independence area of Missouri along with two sisters Zelma May and Deborah Jean Waitley. As a child, Loyal developed a love for all animals with some of his favorites being dogs, cats, birds, and snakes. We remember gran telling us stories about dad catching snakes sneaking them into the house and trying to hide them in his bedroom as pets. Every time gran found out she would run out of the house screaming refusing to go back in until he had released the snakes far, far away from her house. As a teenager he raised his own flock of pigeons for a while making a little spending money in the process from selling pigeon eggs. As an adult there were several years that he took in stray cat or dog that wandered into his yard making them part of his own family and pet menagerie. At the age of 19 he joined the United States Marine Corp where he proudly served his country for 10 years including two tours of active duty in Vietnam. His proudest achievement of his military career was receiving the Republic of Vietnam Cross of Gallentry. The Republic of Vietnam Cross of Gallantry was a decoration presented by South Vietnam to recognize valor and gallantry while serving in active combat against enemy forces. One day while his squad was out on patrol, they noticed smoke from a fire that seemed to be in their patrol area. Upon arriving at the scene, they found that a local orphanage was on fire. The squad immediately without hesitation joined the orphanage staff in evacuating children from the burning building. Because of their quick and decisive actions all children were rescued without serious injury. In the '60's dad met and married his first wife, Janice Kay McCullough. Together they had three children: Loyal Lee Jr., Pamela Lyn and Denise Kay Waitley The first-time dad saw mom she had just walked through the mess hall doors. Mom and dad met in the late '60's, became parents to one daughter, Carolyn Elizabeth in 1970 and married on August 11th, 1977. Dad was working on the chow line at the time. He looked up and was immediately smitten. He turned to his buddy and said, "hey, do me a favor, put just a little extra on her tray." His buddy, looking perplexed, said, "sir, so you know her?" to which dad replied, "Nope, I've never seen her before in my life. But I'm going to marry that beautiful woman someday" and so he did. After he and mom were discharged from the Marines they decided to move back home to Warsaw Missouri. In 1972 they made the move to Caddo County Oklahoma. First living in Oney, then Fort Cobb for 35 years before finally moving to Anadarko in 2010. In 1995 after decades of separation dad received a letter from his oldest daughter Pam who had spent many years looking for him. Then in June of that year he and I traveled to Missouri. He was reunited with two of his three children, and I met them for the first time. This also was one of his happiest moments of his life. You might say Dad had a somewhat eclectic work history. For a short time, he was a carpenter. Loyal helped build one of the houses on Rambling Ridge in Fort Cobb. He also worked as a welder at Hart Mfg. making life stock trailers. Loyal and his father co-owned W&W Salvage in Fort Cobb. He was a Caddo County Sheriff's Deputy for a while. Loyal was a long-haul truck driver with Celedon who's usual route took him from South Texas to Michigan, but also many other states. And he never missed an opportunity to be a shade tree mechanic and tinker about with his his old cars. During his life he was a member of the Fort Cobb CB club, Fort Cobb Methodist Church before transferring membership to the Anadarko Methodist Church. Loyal was a member of the Anadarko VFW post and part of the honor guard as well as serving as post commander for two years. He is preceded in death by his: parents, John, and Neoma Waitley of Fort Cobb, OK; oldest sister, Zelma Shepard, Missouri; middle daughter, Denise Waitley, Missouri; a baby lost to miscarriage. Loyal is survived by his: wife, Patricia of the home Daughters: Carolyn and husband, Trent Lumpkin, Anadarko, OK Pamela and husband, Jerome Hilbert, Lee's, Summit MO Son: Loyal Waitley, Jr, Lee's Summit, MO Sister; Debi and husband, Brian Bourland, Lawry City, MO Grandkids: Lane Lumpkin, OKC, OK; Logan Lumpkin and husband, Tayt Starr, Anadarko, OK; Jeremiah Hilbert, Washington; Jacob Hilbert and wife, Jenny, MO; Laura Foose and husband David MO; Christopher Waitley and Amanda Cox, MO Funeral: 11:00 a.m., Tuesday, Nov. 2, 2021 First United Methodist Church, Anadarko, OK Graveside: 2:00 p.m., Tuesday, Nov. 2, 2021 Ft Sill National Cemetery, Elgin, OK Visitation: 9:00 a.m. � 8:00 p.m., Monday, Nov 1, 2021 Ray and Martha's Funeral Home, Anadarko, OK Under the direction of Ray & Martha's Funeral Home-Anadarko, OK

Loyal Lee Waitley, 79, of Anadarko, OK the Lord called him home on October 25th, 2021, after many years of illness at Comanche Memorial Hospital, Lawton, OK. He was born December 31, 1941, in Independence, Missouri to John Lesley and Neoma... View Obituary & Service Information

The family of Loyal Lee Waitley created this Life Tributes page to make it easy to share your memories.