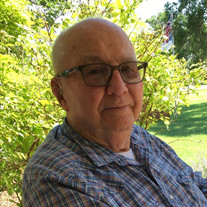 Obituary of Louis Schmidt The Lord called Louis Schmidt home on Saturday, September 12, 2020, at Hensley's Nursing Home in Sayre, Oklahoma. He was born October 6, 1923, to Edward F. and Marie Jantzen Schmidt on a farm south east of Bessie, Oklahoma, just north of the Herold Mennonite Church. Family life was busy with 11 brothers and sisters. At the age of 15 the family moved to his grandparents' house � mile south of the church, this was just a mile south of where he grew up. Church was the center of family life. He attended grade school at the same school his mother attended, Flynn School, which was a 2 room school with grades 1-8. Louis worked on the farm with his dad, and he worked out for different farmers. He and his brothers with his dad shingled several houses, a barn, and the church. When Louis turned 18 he registered with the government and signed up for CPS, Civilian Public Service, as a conscientious objector. This was an alternative to serving in the military while still serving the country. He served two years in Colorado working on roads, sugar beet farms, and in the mountains cutting fence posts. He transferred to California and worked in the Giant Redwood Forest. When World War II was over Louis signed up to go to Europe on a Relief Boat with a load of horses. The trip took a month to go from Houston, Texas, to Dansiz, Poland, and back to Texas. It was on this trip that Psalm 23 became precious to him. He had to sleep near the engine and propellers. The noise and rough sea were overwhelming and he relied on the Scripture for peace. If you ever spent much time in conversation with Louis, you have heard stories from these experiences. It was such an important time in his life. When Louis got home he met Elvera Kliewer and they dated for over a year. They got married on August 8, 1947. They had three girls: Nancy, Valora and Arlene. Elvera worked side by side with Louis raising cattle, wheat and cotton. He did carpentry work on the side. He helped work on several houses, especially the cabinetry. In March 1966 the house the family was living in caught on fire from old wiring. The house and everything in it was a total loss. However, all lives were saved. The family moved into his parent's old farm house, tore it down and built a beautiful new house with the old wood. God blessed Louis and Elvera as they continued to farm until 2006 when they sold all the farming equipment and rented the land. Louis continued to work in his shop repairing things and making lighthouses and toys for his great grandchildren. Elvera passed away on January 2016. Louis continued to live on the farm for a year till he had a stroke. He moved to Hensley's Nursing Home in Sayre till he was stronger. Then he moved to a small house across from Arlene, but had to move back to the nursing home after declining again. He loved the visits from family and friends while in the Nursing Home. The nurses and staff were wonderful to him, and he always offered them candy, "one for now and one for your pocket!" Louis and Elvera loved Herold Mennonite Church. He served as Deacon, Trustee, custodian, taught Sunday School, and helped anywhere there was a need. He helped panel the church sanctuary, helped build the new Sunday School rooms and finished the Family Life Center. He was preceded in death by his wife, Elvera; daughter, Nancy Koehn; great grandson, Orion Unruh; six brothers, two sisters, and his parents. He is survived by his son-in-law, Bob Koehn of Elk City; daughter Valora and husband Elroy Unruh of Meno; daughter Arlene and husband David of Sayre; Grandchildren�Joy and husband Eric Vandergrift and daughter Grace of El Reno, Chad Unruh, wife Natalee and son Asher of Norman, Esther and husband David Miller and sons Josiah and Benaiah of Cordell, Hannah Epp of Oklahoma City, Rachel Epp of Kansas City, Missouri, Riley Shelton and Bailey Sterling of Sayre; sisters Ann Schmidt of Cordell, Helen Schmidt of the Corn Heritage Village, and Katie and husband George Smith of Denver, Colorado. With the Lord as his shepherd, Louis is celebrating the beginning of his eternal life. In Lieu of flowers donations can be made to the Herold Mennonite Church. Funeral :2:00 p.m., Tuesday, September 15, 2020 Herold Mennonite Church Bessie, Oklahoma Interment: Herold Mennonite Cemetery Bessie, Oklahoma Visitation: 2:00 p.m. ~ 8:00 p.m. Sunday, September 13, 2020 Family welcoming guest from 2:00 p.m. ~4:;00 p.m. 9:00 a.m. ~ 8:00 p.m. Monday, September 14, 2020 family welcoming guest from 6:00 p.m. ~ 8:00 p.m. Ray and Martha's Funeral Home Cordell, Oklahoma Under the direction of Ray & Martha's Funeral Home, Cordell, OK

The family of Louis Schmidt created this Life Tributes page to make it easy to share your memories.