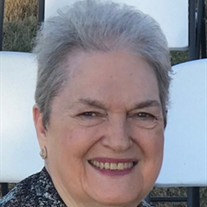 Lois Jean was born on September 26, 1942 to Clyde and Lola (Nichols) Jackson in Carnegie, Oklahoma. She lost her father around 18 months old while he was stationed overseas in Okinawa, Japan. This leading to her and her mother moving in briefly with her grandparents. At age eight she gained a bonus dad when her mother remarried and to this union she gained a little sister. She attended school in Carnegie and proudly graduated in the Class of 1960. In her Junior year of high school, she married the first love of her life Roy Harrison, on June 6th, 1959. To this marriage she gave birth to their first daughter in July of 1960. Several years later in July of 1967 their second daughter was welcomed home to the family of three. In 1977 she completed her training at Eve's Beauty School after which she built and ran a successful business in Carnegie for over 20 years. In this window of time, after many happy years her and her husband parted paths. In September of 1995 she married the second love of her life, John Griffin, and was blessed with eight very happy years until his passing in 2003. She then married Dwane Clinton in 2004. During this marriage and due to unforeseen health issues she was forced to retire causing her great sadness losing her many loyal customers that had become family. She later lost this husband after a lengthy illness in 2012. In her retired life she enjoyed chasing her grandchildren in their many adventures in life. This varied from high school and collegiate games as well as many state playoffs with cheer, baseball, basketball, and football. To say she loved them is an understatement, her smile would light up a room anytime one walked in. She always greeted them with a hug, and a kiss followed by a "hello sug". She was well known in later years for her amazing baking and loved to feed her family when time allowed. She had a style and class you don't see much anymore. She was a fierce lover of her family and was always there for them no matter what time of day or night regardless of the need. Not many dared to go against her family, or they were greeted with a adversary they were not prepared for. If she was not with her kids or grandkids she was with any combination of her group of running buddies. She was blessed throughout the years to collect a group friends who loved her dearly. Whether it be baking or running with her sister-in-law/friend Judy or playing wahoo and laughing till she hurt with the clique. She is preceded in death by her parents Clyde Jackson, Marion & Lola McGill, her husbands John Griffin and Dwane Clinton, her Granddaughter Dani House, her Great-grandson Maverick Fudge, her brother-in-law Dean Goergen Surviving Lois Jean is her daughter Jeanene House and husband Harlon, grandson Kody House and wife Meg, granddaughter Kassidy Zimmerman and husband Grant, and two great-grandsons Madden Zimmerman and Maverick House Her Daughter Lori Robnett granddaughter Mckenna Fudge and husband Sean, granddaughter Maci Bennight and husband Jacob, grandson Austen Robnett, great grandson Jayden Fudge, great granddaughters Kaylee, Missy, Lily and Willow Fudge, Sawyer and Sadie Bennight Her Sister Marilyn Goergen, nephew Travis Goergen and wife Courtney, nephew Johnnie Goergen, and great nieces Alexys Harmon and husband Tyler, Devry Goergen, Taylinn Harmon, nephews Ainsley and Copelyn Harmon

Lois Jean was born on September 26, 1942 to Clyde and Lola (Nichols) Jackson in Carnegie, Oklahoma. She lost her father around 18 months old while he was stationed overseas in Okinawa, Japan. This leading to her and her mother moving in briefly... View Obituary & Service Information

The family of Lois Jean Harrison-Griffin created this Life Tributes page to make it easy to share your memories.