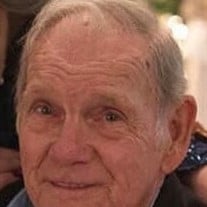 We mournfully announce the passing of Lawrence Dale Boone, 88, of Fort Cobb, Oklahoma. Dale passed away on March 18, 2021 of heart failure at his home in Fort Cobb. Dale was born on May 26, 1932 in Anadarko, Oklahoma to John Calvin "Cotton" and Cecil Cora Boone of Anadarko. He enlisted in the National Guard in 1948 and was stationed in Japan for a short time. He is also a veteran of the Korean War. He graduated from Anadarko high school in 1951. Dale married his high school sweetheart, Roberta Carolyn Patton, on August 20, 1950. They built their lives together for 46 years and had five children. The marriage ended in 1996. Dale had three meaningful careers in his lifetime. The first was as a police officer for the Anadarko Police Department. He had the great honor of being chosen as the officer to train the first canine for the Anadarko Police Department in 1968. He spent six weeks in Texas training with Rocko for police duty. His second and longest career was as a carpet layer. He laid carpet for over 40 years all over the state of Oklahoma. He also worked in Arizona and in the Virgin Islands. His last, and most precious to him, was as a bus driver for the Anadarko Public School system. He drove Route 3 for 11 years making many memories with the children on that route. Dale loved the Confederate Air Force. He had an affinity for World War II airplanes. As a young man he had a professional student pilot license and at one time owned a Cessna 150. Visitors to his home would get a glimpse of model P-40s and P-38s on the ceiling of his dining room. Dogfights and barrel rolls were his specialty. During slow times between jobs he could be found in the kitchen baking bread or at the river with his "land shark" Radar, the family dog. Dale never met a stranger. He could spark up a conversation with anyone and made everyone feel right at home with his easy laugh and his snarky sense of humor. He is preceded in death by his parents, a daughter, Carolyn Dale Rogers, a son, Johnny Carrol Boone, and grandsons Steven Brown, and Michael Brown. He is survived by his wife, Janice Lavene, of Fort Cobb, OK, three children, Larry and Marva Boone of Mustang, OK, Karlya Boone of Leesburg, VA, Keith Boone of Oklahoma City, OK, one sister, Gaynell Gibson of Blanchard, OK, two nieces, Robin DeJarnett of Anadarko, and Sherrie Christian of Blanchard, OK, eight grandchildren, Teri Boone Benavidez of San Antonio, Texas, Christopher Boone, of Midwest City, OK, Dale Melton, of Temple Texas, Ravyn Deerinwater, of Las Cruces New Mexico, Mylie Boone, Kylie Boone, Emma Boone and Alexander Boone of Mustang, OK, and eight great grandchildren, Garion Benavidez of San Antonio Texas, Avery Benavidez of San Antonio Texas, Haven Benavidez of San Antonio, Texas, Trevor Boone of Oklahoma City, Gwynne Boone of Oklahoma City, Taylor Davis, of Oklahoma City, Kendale Melton, Florida and Karley Melton of Florida, and two great great grandchildren, JaRee King of Oklahoma City, and Carliegh Houben of Florida. There will be no official service. There will be a family gathering at Memory Lane Cemetery in Anadarko, Oklahoma on Wednesday, March 24, 2021 at 10 AM to distribute his ashes. All family and friends are welcome to attend.

We mournfully announce the passing of Lawrence Dale Boone, 88, of Fort Cobb, Oklahoma. Dale passed away on March 18, 2021 of heart failure at his home in Fort Cobb. Dale was born on May 26, 1932 in Anadarko, Oklahoma to John Calvin "Cotton"... View Obituary & Service Information

The family of Lawrence Dale Boone created this Life Tributes page to make it easy to share your memories.

We mournfully announce the passing of Lawrence Dale Boone, 88,...