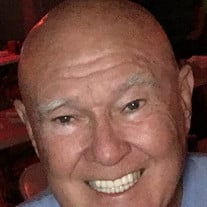 On Monday, January 18, 2021, Larry Ed Rowe, loving husband and father of three children passed away at the age of 80. Larry was born on May, 20, 1940 in Elk City, Oklahoma to Harwood and Pearle Rowe. He received his Doctorate Degree in Chiropractic from Logan Chiropractic College in 1963 and practiced chiropractic forty-two years in Carnegie, Oklahoma. On December 20, 1959 he married Sondra Sue Robertson. They raised one son, Rob and one daughter, Suzanne. Larry was very active in his community being a Boy Scout Master and coaching Little League Baseball. He was active in Chamber of Commerce and received The Paul Harris Award from Rotary. He was also a proud supporter of the Carnegie School System. Larry enjoyed life to the fullest and was always the life of the party. Some of the many things he enjoyed were being around his family and traveling with them and many friends. He was a master at creating beautiful stained glass pieces and woodworking. Sailing on Ft. Cobb Lake and restoring old cars were favorite past times. After retiring to Pharr, Texas he enjoyed growing huge poinsettia plants. He will always be remembered by others for his great smile and ability to include everyone and make everyone feel special. He had many best friends. He was preceded in death by his daughter, Debra Dee; his father and mother, Harwood and Pearle; three brothers, Harwood, Robert, and John; and two sisters, Barbara and Linda. He is survived by his wife, Sondra; his son, Rob and children, Jessica and Aaron; his daughter Suzanne and her son, Aden; his sister-in-law, Jean Ann and her husband, Ron and their children Emily and Amanda and their families; his brother, Jacque and family. Memorial Service: 11:00a.m., July 17, 2021 Ray & Martha's Funeral Home Chapel Carnegie, Oklahoma Interment: Carnegie Cemetery Carnegie, Oklahoma Under the direction of Ray and Martha's Funeral Home, Carnegie, OK. Donations of remembrance may be sent to Center of Family Love, 635 Texas Ave, Okarche, OK 73762.

On Monday, January 18, 2021, Larry Ed Rowe, loving husband and father of three children passed away at the age of 80. Larry was born on May, 20, 1940 in Elk City, Oklahoma to Harwood and Pearle Rowe. He received his Doctorate Degree in Chiropractic... View Obituary & Service Information

The family of Larry Ed Rowe created this Life Tributes page to make it easy to share your memories.