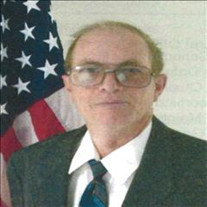 Larry Alvin McAbee, 74, passed from this life November 15, 2021 in Elk City, Oklahoma. Larry was born October 31, 1947, to Alvin and Helen (Cunningham) McAbee, in Hobart Oklahoma. Larry was a Hobart High School graduate. Larry was baptized into the General Assembly and Church Of The First Born, August 6, 1962 by Otto Cunningham, his grandpa. During those early years, his parents opened a family firework stand where not only Larry, but his siblings helped sell fireworks to supplement the family income from approximately 1958 through 1980. He thoroughly loved the fire cracker stand. He enjoyed fishing with his grandparents, Otto and Etta Cunningham. Those weekends with Dennis (Brother) and Danny Davis (Cousin) at the grandparents house were memorable. Shooting BB guns and such like. Larry enjoyed attending high school football games and following the OU Sooners football teams through the years. He was an avid coin collector, both " wheat" pennies and silver dollars. He bought and sold baseball cards as well. Thanksgiving gatherings' at the grandparents house would bring Larry and the others to play horseshoes in the yard. After high school, he attended Oklahoma School of Business and Accounting, where he obtained completion in 1969. He also was employed by Kimberling's grocery in the metro area during that time. Later in life, in March 1974, he became employed at Altus Air Force Base, Altus, Oklahoma , where he works in food services. Less than two years later, he was promoted to the job description of CE Clerical/Typist. In 1982, his vocation became outdoor recreation supply clerk through July 1984. From that point to his date of retirement in 2010, he perform the duties of a Host Aviation Resource Management Flight Records Technician. The years pass after retirement and he relocated to Elk City in 2014 where he spent the last seven years with his brother Dennis. We will remember his over-the-top desire to help people; he would give his last dollar to someone if he felt it would make a difference. Larry was preceded in death by his father, Alvin McAbee, and mother, Helen McAbee, and his grandparents, both paternal and maternal. He was also preceded in death by his younger brother, Rod McAbee. Larry is survived by his brother Dennis McAbee and wife ,Karen, children Jay McAbee ,and wife Ede, and family, Ginger Schocklee and family, Sabrina Johnston ,and husband Bo, and family, Jeremy McAbee and wife, Shawna, and family ,sister Pamela Oakes, and husband David, and family, and brother Kent McAbee, and wife, Loura, and family. Larry will be missed by all that knew him. Graveside Service: 11:00am, Saturday, November 20, 2021 Hobart Rose Cemetery, Hobart Visitation: 1:00pm-8:00pm Thursday, November 18, 2021 9:00am-8:00pm Friday, November 19, 2021 Ray and Martha's Funeral Home, Hobart Interment: Hobart Rose Cemetery, Hobart, OK Under the direction of Ray and Martha's Funeral Home, Hobart

The family of Larry McAbee created this Life Tributes page to make it easy to share your memories.