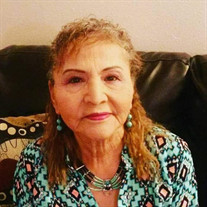 Words seem to fail us when we reflect on our mother's life. We are very fortunate to be her children and what an honor to call her our mom. I feel like it would take a lifetime to write all of the beautiful memories we all share. We would like to share a few of our favorites with you all. I hope they can convey how wonderful of a mother she was. Joquetta Ann "Tanedooah" Redbird went to her heavenly home on December 14, 2020. She was born September 24th, 1941 to Lavena Inez Tanedooah (go-go) and Bruce Haumpy. She was also a direct descendant of Satethieday. She graduated from RIS. Soon after she met the love of her life Robert Larry Redbird Sr and they were married in Gotebo, OK in 1954 . They had 14 kids . She was a homemaker and loved to travel, cook, read, sew, arts & crafts, shop, going to church, sing with their group Redeemed. She also embraced her Native American heritage and enjoyed going to pow-wows. They took their family to numerous old fashion camp meetings and she accepted the lord in 1976. Joquetta & Robert Redbird SR soon became ministers and opened Tabernacle of Faith in Anadarko, Oklahoma. They started to provide shelter for those whom were homeless, fed and clothed those in need.She never met a stranger, and she was always willing to cook for anyone who was hungry. Soon after, they became pastors and they opened Tabernacle of Deliverance in Stecker, Oklahoma. Joquetta was met in heaven by her mother Lavena INEZ Tanedooah father Bruce Haumpy, Grandfather William (Cornbread) Tanedooah, grandmother Bessie Enoeah Tanedooah, daughter Crystal Redbird, her husband Robert Redbird sr., little brother William Henry Tanedooah, Brother Otis Saddleblanket, grand daughter Priscilla Ann Redbird and numerous friends who were like her family. She is survived by her children: Darlene Redbird and companion Leon DelGarito of Chandler, AZ Robert Redbird Jr and wife Ruby Anadarko, OK Steven Redbird and companion Lawton, OK Jennifer Redbird of Lawton, OK William Redbird and wife, Tina of Towaoc, CO. Vivian Antonio and companion Kendrick of Anadarko, Ok Tonia Redbird of Oklahoma City, Ok Terry Crounse and husband George Crounse of Cedar Hill, TX Cora and her companion of Anadarko, OK Patty DeBartolo and husband Lonny DeBartolo of Lawton, OK Dawn Redbird and Companion Santiago Leal JR of Norman, OK Anna Slimp and husband Bill Slimp III of Showlow AZ, James Redbird and wife Jennifer Norman, OK Ann Chappel of Hawaii Special Granddaughter she raised Tajia redbird and companion Norman, OK and numerous nieces, nephews and grandchildren. Two Sisters: Shirley Darlene Tanedooah Williams, Jackie Beth Marrow and many brothers and sisters in Christ. Graveside: 1:00 p.m., Wednesday, December 23, 2020 Memory Lane Cemetery Anadarko, Oklahoma Visitation: 9:00 a.m. ~ 8:00 p.m., Monday, December 21, 2020 9:00 a.m. ~ 8:00 p.m., Tuesday, December 22, 2020 9:00 a.m. ~ 12:00 p.m., Monday, December 23, 2020 Ray & Martha's Funeral Home, Anadarko, Oklahoma Under the direction of Ray & Martha's Funeral Home-Anadarko, OK

Words seem to fail us when we reflect on our mother's life. We are very fortunate to be her children and what an honor to call her our mom. I feel like it would take a lifetime to write all of the beautiful memories we all share. We would like... View Obituary & Service Information

The family of Joquetta Ann (Tanedooah) Redbird created this Life Tributes page to make it easy to share your memories.