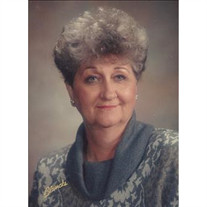 LaFern Ann (Rozell) Freeman was born north of Sentinel on August 21, 1935, to Leola Mae (Walls) Rozell and William Francis (Bill) Rozell. She was born prematurely and weighed 2 1/2 lbs. She slept in a shoebox and the family kept the fires going to keep her warm even though it was August. She attended school in Sentinel first through twelfth grade - graduating in 1953. She then attended college in Weatherford for one year, later transferring to Oklahoma A & M - now Oklahoma State University - for 2 years. She graduated in three years in 1956 with a degree in Elementary Education. Wayne Freeman and LaFern were married that summer on August 24, 1956. They moved to Beggs, Borger, and Amarillo with her teaching in Beggs and Amarillo. They then returned to Sentinel in the fall of 1959. Their first daughter Joni was born in Sentinel in 1957, and their second daughter Joy was born in Sentinel in 1961. She taught private Kindergarten in Sentinel for two years before accepting a Kindergarten position at Burns Flat for two years. She then returned to Sentinel in 1965, to be the Kindergarten teacher until 1988. She also obtained her Masters in Library Education and was the Librarian for many years. She retired in 1988, but stayed on for half-days as librarian until 1997. She was instrumental in starting the HeadStart Program in Sentinel in the mid-60's. Wayne and LaFern had lived in their home on Whitmer Street since the fall of 1960. They moved to Woodland Gardens in 2018 due to a stroke she suffered in December 2007. She was a lifetime member of the American Legion Auxiliary and a member of the First Baptist Church Sentinel, where she was a Sunday School teacher. She left a lasting impression on many a 5-year-old Kindergartener with her boundless energy and enthusiasm and occasionally the use of her sad-face ping pong paddle. She made the work of learning enjoyable for countless little minds. She was preceded in death by her parents, great-granddaughter Leighton Joy Alvarez, two brothers Don Rozell and Dale Rozell, two sisters- in-law Ina Mae Barnett and Joyce McAlister, two brothers-in-law Ray Freeman and Bob McAlister. She is survived by her husband Wayne Freeman, two daughters: Joni and Kirby Sheperd, Joy and Tim Wald, six grandchildren: Grant and Jenny Sheperd, Jantz and Alyssa Wald, Lexi and Brandon Hinz, Sierra and Rafe Alvarez, Summer Wald, K.C. and Jordon Marple, nine great-grandchildren: Ava, Joe, Everly, Luke, Jett, Scarlett, Lola, Crosslee,and Londyn, and a sister-in-law, Mary Jane Rozell. Graveside: 2:00 p.m., Saturday, November 30, 2019 Sentinel Cemetery Sentinel, Oklahoma Services are under the direction of Ray & Martha's Funeral Home, Sentinel.

LaFern Ann (Rozell) Freeman was born north of Sentinel on August 21, 1935, to Leola Mae (Walls) Rozell and William Francis (Bill) Rozell. She was born prematurely and weighed 2 1/2 lbs. She slept in a shoebox and the family kept the fires going... View Obituary & Service Information

The family of LaFern Ann Freeman created this Life Tributes page to make it easy to share your memories.