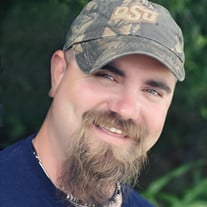 Kevin Kendall Lile, 40, of Roosevelt, Oklahoma passed away peacefully on February 23rd, 2021 at Southwest Medical Center in Lawton, Oklahoma. He was born January 6th, 1981 to Phillip and Beverly (Howard) Lile in Altus, Oklahoma. Kevin grew up in Roosevelt and was a 1999 graduate from Navajo High School and was a lifelong member of the Roosevelt First Baptist Church. He went on to achieve a certificate in Aviation Maintenance Technology at Southwest Technology Center, Altus Oklahoma in 2000. Kevin was a part of the A-Team at Altus Air Force Base and worked on C5 planes and later moved to C17 planes. His disability retired him from the A-Team in January of 2010 after a diving accident that occurred on June 13, 2009. Prior to his accident, he was an avid hunter and fisherman and loved to drive his race car. After his retirement he loved to be involved with anything his children, nephews or niece were involved in and was a huge supporter of the Navajo Indians, Snyder Cyclones and Oklahoma State Cowboys. His favorite pastime was trash talking OU fans. Kevin enjoyed visiting with his therapists at Jim Thorpe, Lawton Comanche County - Out Patient, Southwest Medical Center and TheraWest Physical Therapy in Clinton. Kevin truly lived life to the fullest and will always be known for his contagious laugh and long elaborate stories. He was always a good friend to anyone who needed an ear and left this world saving lives by being an organ donor. Survivors include: Children: Kyli Ellison of Blair, OK Kearstyn Lile of Cantonment, FL Kruz Lile of Comanche, OK Parents: Phillip Lile & wife Beverly of Roosevelt, OK Sister: Lori Lile Bagley & husband Joe of Snyder, OK Nephews: Kamron Lile and Kyson Lile Niece: Kendalynn Howard Grandmother: JoAnn Howard of Roosevelt, OK Grandfather: Bill Lile Roosevelt, OK Numerous Aunts, Uncles, and Cousins Preceded in death by: Grandfather: J.R. Howard, Grandmother: Nelda Lile and Cousin: Shawn Moore Funeral: 1:00 p.m., Saturday, February 27, 2021 First Baptist Church Roosevelt, Oklahoma Interment: Roosevelt Cemetery Roosevelt, Oklahoma

The family of Kevin Kendall Lile created this Life Tributes page to make it easy to share your memories.