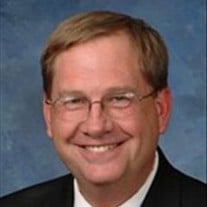 Kenneth Ray (Ken) Knippel passed away on Thursday, January 30th, 2020 after a long battle with pancreatic cancer. He was surrounded by his wife and daughters in his home in Spring, Texas. Ken was the oldest son of Frances and Kermit Knippel. Ken graduated from Nolan Catholic High School in Fort Worth in 1976 and earned his Bachelor's degree from Texas Tech University in 1980. He earned a Master's degree from Sam Houston State University in 1987. He served as an educator for 39 years in Aldine Independent School District as a teacher, coach, assistant principal, principal, and assistant superintendent before retiring in 2019. During his tenure in Aldine, he earned a reputation for being an advocate for all students as well as a highly dedicated and honorable administrator. Ken most enjoyed time on the golf course, cheering on his Red Raiders and Cowboys, and spending time with his family. He was a devout Catholic and led his family with his faith. Ken is survived by Susan Knippel, his wife of 39 years, his daughters Katie Gomez, Emily Lopez, and Amanda Knippel, and his sister Beth Kuykendall. He is also survived by his sons-in-law Andres Gomez and Stephen Lopez, as well as his beloved granddaughter Alexandra Gomez. He was preceded in death by his parents and his brother Paul Knippel. A viewing will be held at Klein Funeral Home on Champion Forest Drive on Sunday, February 2nd from 5pm to 8pm, with a rosary service at 6:30pm. The funeral will take place at St. Edward Catholic Church in Spring on Monday, February 3rd at 10:30am. A private family burial will follow at Resurrection Cemetery in Hobart, Oklahoma. In lieu of flowers, the family is requesting that contributions be made to the Ken Knippel Endowed Scholarship, an endowment of which Ken was very proud. Donations can be made at the viewing or to the Aldine Education Foundation at www.AldineEducationFoundation.org with a note in the Special Instructions "For the Ken Knippel Scholarship Graveside: 11:00 a.m., Wednesday, February 5, 2020 Resurrection Cemetery Hobart, Oklahoma Under the direction of Ray & Martha's Funeral Home, Hobart, Oklahoma.

Kenneth Ray (Ken) Knippel passed away on Thursday, January 30th, 2020 after a long battle with pancreatic cancer. He was surrounded by his wife and daughters in his home in Spring, Texas. Ken was the oldest son of Frances and Kermit Knippel.... View Obituary & Service Information

The family of Kenneth Ray Knippel created this Life Tributes page to make it easy to share your memories.