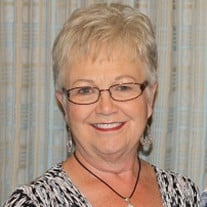 Kathryn Yvonne (Gray) Tarbox was born January 25, 1948, in Rocky, Oklahoma, to Lonny and Joy (Tittle) Gray. She passed away on November 1, 2017, in Amarillo, Texas. Kathy was raised on the family farm near Rocky and was the oldest of eight siblings. She graduated from Rocky High School in 1966 as Valedictorian. She married Michael Humphreys on March 12, 1966. To this union three daughters were born. Kathy raised her three adorable girls in their home on Mimosa Street in Cordell where she maintained a beautiful flowerbed and yard. After the girls were raised, she married Dan Tarbox and moved to Amarillo, Texas. She had a very fulfilling career in the banking industry from the early 1970's until her retirement in 2013. She began her banking career at Cordell National Bank, then later went to work as branch manager at Local Federal Bank in Clinton. After moving to Amarillo, she was a bank officer at Amarillo National Bank until her retirement. She was a member of the Women Bankers Association. Throughout her career she developed lifetime friendships with countless customers and co-workers. Her favorite pastime was spending time with her grandchildren and hosting Camp Gramma. She had a passion for photography that turned into a part-time job photographing weddings. She enjoyed maintaining her flowerbeds and was known by many for her green thumb. She also enjoyed raising chickens and her kitty cats. After her retirement she enjoyed traveling and sightseeing. She was preceded in death by her father and mother; sister Gena Holman; and husband Dan Tarbox. She is survived by her three daughters: Tracey Smith of Plano, Texas; Sherri Waldrop and husband Robert of Cordell; Tamara Christian and husband Paul of Weatherford; eight grandchildren: AJ Searcy, Parker Smith, Rylee Humphreys Guyton, Trey and Bryce Waldrop, Audrey, Grant, and Camber Christian; sisters: Cindy Brooks, Kelli Stratton and husband Jay; brothers: Leslie Gray and wife Karen; Lowell Gray and wife Cheryl; Monte Gray and wife Debra; Robert Gray and wife Stephanie; brother-in-law Eldon Holman; aunts: Eva and Neva Tittle; dear friend and companion Wayne Cunningham; 19 nieces and nephews and a host of great-nieces and nephews, cousins, and friends. Funeral Service: 2:00 p.m., Monday, November 6, 2017 First Baptist Church Cordell, Oklahoma Interment: Lone Star Cemetery Rocky, Oklahoma Under the direction of Ray & Martha's Funeral Home-Cordell

Kathryn Yvonne (Gray) Tarbox was born January 25, 1948, in Rocky, Oklahoma, to Lonny and Joy (Tittle) Gray. She passed away on November 1, 2017, in Amarillo, Texas. Kathy was raised on the family farm near Rocky and was the oldest of eight... View Obituary & Service Information

The family of Kathryn Yvonne Tarbox created this Life Tributes page to make it easy to share your memories.