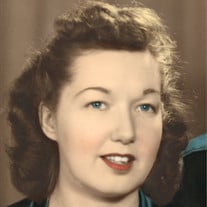 June Gladys Coulter Bryan passed away peacefully in her sleep on October 29, 2020 in Lawton, Oklahoma at the age of 90. She was born at the beginning of the Great Depression on November 8, 1929 in Carnegie, Oklahoma, the only child to Newlon and Gladys (Adams) Coulter. She was preceded in death by her husband, Bill Bryan, and her parents. She is survived by her only child, Gayla LeMaire and husband Charles; and two granddaughters, Monique Ravi and husband Ajaay, and Collette Berenguer and husband Waldemar. June began her education at Samone School, just outside Carnegie, and was in 4-H. She graduated from Mountain View High School in 1948. After attending the Business College in Oklahoma City and working at the Oklahoma City Board of Education, she married Bill Bryan of Carnegie, who was in the U.S. Air Force and served in Korea during the Korean War. Though June always considered Carnegie home, she and her young family had several career moves across the country. Widowed in 1971, she lived in Oklahoma City for many years until eventually returning to Carnegie and the family farm to care for her father in his later years. She continued living there until 2015 when she moved into assisted-living in Lawton. Always a lady, June was quietly cheerful, articulate, and enjoyed socializing one-on-one with family and close friends. She always looked for the beauty in life, and was passionate about style and surrounding herself with beautiful things. As a part of a multi-generational line of fashionable women, she was a collector of tasteful accessories and d�cor. This trait is evident in her mother, Gladys, who created beautiful, unique fashions, some from bleached flour sacks, down to her daughter, Gayla, who won the national "Best State Costume" as Miss Oklahoma USA in 1975, and to her grand-daughters, who both excelled in art and one of whom graduated with a degree in Fashion Design. June also donated some special ensembles to The Fashion Collection of both the University of Central Oklahoma and the University of North Texas for their exhibits. These are a few of her favorite things: Pink was June's favorite color. She enthusiastically collected high-fashion Barbie dolls. One of her uncles affectionately called her "June Bug". She liked cats and fed every stray that she met. She was a very pretty woman--both inside and out. Always devoted to her family, June was especially proud of her daughter and adored her granddaughters. She was very kind and good to people. She was beloved and she will be missed. Viewing will be held on Thursday November 5, 2020 until 8pm at the Ray & Martha Funeral Home in Carnegie, Oklahoma. Funeral service will be held at 2 PM, Friday, November 6, 2020 at the First Baptist Church in Carnegie, Oklahoma, with graveside service to follow at the Carnegie Cemetery. The family asks that Social Distancing Be Observed and Masks Be Worn for everyone's safety. Flowers are welcome at the Ray & Martha Funeral Home, 20 W Main St, Carnegie, OK 73015; or donations may be made to the American Cancer Society at www.cancer.org in memory of June Bryan (notifications can be made to [email protected] ). Under the direction of Ray & Martha's Funeral Home, Carnegie, OK

June Gladys Coulter Bryan passed away peacefully in her sleep on October 29, 2020 in Lawton, Oklahoma at the age of 90. She was born at the beginning of the Great Depression on November 8, 1929 in Carnegie, Oklahoma, the only child to Newlon... View Obituary & Service Information

The family of June Bryan created this Life Tributes page to make it easy to share your memories.

June Gladys Coulter Bryan passed away peacefully in her sleep...