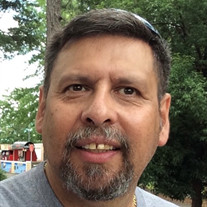 Julian Alonzo Jr., 61, Air Force veteran, beloved husband and father, of Edmond, Oklahoma passed away peacefully November 10, 2021 at St. Anthony's Hospital in Oklahoma City, Oklahoma. He was born June 4, 1960 in San Antonio, Texas. Julian grew up in Roosevelt, Oklahoma. In 1982, he met the love of his life, Gina Biederstedt from Lemmon, SD. They were united in marriage on August 19, 1983. In February 1995, they were blessed with the birth of their son, Derek J. Alonzo. Julian was a stylish, yet, practical man. He always said "you have to look good to play well" and being presentable was very important to him. His favorite fashion staple was a pair of nice dress shoes and a suit. Julian was also a food connoisseur. No matter what city he was in, he could always tell you where the best bites to eat were. His favorite place to eat was The Butcher BBQ Stand in Wellington, Oklahoma, even though he swore he made the best ribs using his Pit Boss on his porch with his wife and son. Sharing a meal and having a conversation about life with those around him was his favorite way of spreading love. He was a dedicated OU football fan, St. Louis Cardinals fan, and boxing enthusiast. If you asked him, he was ready to take over the OU head coaching position as soon as it became available. Julian was also a car fanatic; his favorite was the Ford Mustang. Anytime he saw a car he liked, he had to point it out to who he was with and would later have to go test drive it. When Julian was excited, it was easy to tell, as he put a big smile on his face, and rubbed his palms together. Any room Julian stepped into, he electrified with excitement and joy. He consistently put others first and always wanted to lend a helping hand. He truly was the ultimate caregiver. No matter where he was in life, he always made sure to make himself approachable. Julian was in the US Air Force for 21 years. During this time, he got to experience Colorado, Saudi Arabia, Alaska, Croatia, Mississippi, and Oklahoma. Upon his retirement from the US Air Force, he worked for the Department of Homeland Security in the immigration division (USCIS). He held positions with USCIS in the St. Louis Field office, Oklahoma City Field office, Atlanta Field Office, and the Texas Service Center. While working for USCIS, the favorite part the job was attending the naturalization ceremonies to see all the people he helped transition on to their new lives in the United States. Julian was the life of the party, absolutely loved by everyone, and will be deeply missed. In lieu of flowers, please do something kind for someone else to best honor Julian's memory. He is preceded in death by his father, Julian Sr., mother, Manuela, brothers: Gilbert Alonzo and Thomas Alonzo, sisters: Simona Juarez, Maria Coronado, Minerva Aguilar, and Baby Junior. Julian is survived by his: Wife: Gina Alonzo Son: Derek Alonzo Sisters: Dolores Price and husband Fred Ruth F. Cardona Emma Shandor and companion Phil Margie Jackson and husband John Brother: Andy Alonzo and wife Suzy Numerous nieces, nephews, and other family members. Rosary: 6:00 p.m. - 8:00 p.m., Friday, November 19, 2021 Ray and Martha's Funeral Home Chapel 306 W 11th St Hobart, OK Funeral: 10:30 a.m., Saturday, November 20, 2021 Saint Peter & Paul Catholic Church 324 S Randlett St Hobart, OK Interment: 11:30 a.m., Saturday, November 20, 2021 Roosevelt Cemetery, Roosevelt, OK Visitation: 11:00 a.m. - 6:00 p.m., Friday, November 19, 2021 Ray and Martha's Funeral Home Chapel 306 W 11th St Hobart, OK Under the direction of Ray & Martha's Funeral Home - Hobart, OK

The family of Julian Alonzo, Jr. created this Life Tributes page to make it easy to share your memories.