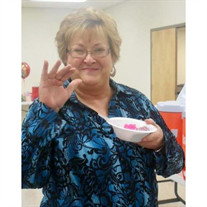 Judith Ann Smith (Judy) 68 of Sentinel , Oklahoma was born on October 28th 1949 in Checotah, Oklahoma to Leo and Lola Grace (Bacon) Williams. She left her earthly home and entered the gates of Heaven on April the 21st 2018. Judy graduated from Checotah high school in 1967 and went to college in Stillwater where she met and married Terry Farris from Sentinel Oklahoma where they eventually made their home. From that union they were blessed with Judy's loves Wes and Amanda. She was a faithful member of the First Baptist Church. Judy had multiple jobs at the church and was a member of several committees. She was a very influential Sunday school teacher for many age groups. Judy loved being a member of the church choir and Heart Song. She was a prominent member of the Women's ministries and loved pouring her heart into them. She loved Sentinel and wanted it to be a good community to live in. She helped raise money for ambulance supplies and bunker suits for the fire department. Judy spent time as a respiratory therapist tech in Clinton Regional Hospital and was the office manager at the Sentinel Coop. She owned the Western Auto store in Sentinel for many years. On May 30, 2000 Judy married Kelly Smith in Sayre Oklahoma. Kelly and Judy formed Superior Resources in Sentinel where she was the office manager until she became ill. Judy had a smile that would light up a room and will be missed so much. She is survived by her husband Kelly of the home. 4 children: Wes Farris and wife Kristy of Sentinel Oklahoma Amanda Hamblin and husband Gentry of Sentinel Oklahoma M'Lynn Hanes and husband Billy of Sentinel, Oklahoma Gerron Smith and wife Kimberly of Chickasha Oklahoma 10 grandchildren: Marlie and Teague Farris, Ayvree and Graham Hamblin, M'Kenzie Smith, May'Cee and Maxx McDaugale, Jack, Benjamin, and Cal Smith 2 sisters: Linda Palmer of Hot Springs Arkansas Kathy Williams, Fort Smith Arkansas And numerous nieces, nephews, cousins and a loving host of friends. She is preceded in death by her parents and one brother Kenny Williams Memorials can be sent to the Sentinel Volunteer Fire Department or the Sentinel First Baptist Youth Department. Visitation: 9:00 a.m. - 8:00 p.m., Monday, April 23, 2018 Ray & Martha's Funeral Home- Sentinel Graveside: 10:00 a.m., Tuesday, April 24, 2018 Sentinel Cemetery Celebration of Life: 1:00 p.m., Tuesday, April 24, 2018 First Baptist Church Sentinel, Oklahoma Under the direction of Ray & Martha's Funeral Home- Sentinel

Judith Ann Smith (Judy) 68 of Sentinel , Oklahoma was born on October 28th 1949 in Checotah, Oklahoma to Leo and Lola Grace (Bacon) Williams. She left her earthly home and entered the gates of Heaven on April the 21st 2018. Judy graduated from... View Obituary & Service Information

The family of Judith Ann Smith created this Life Tributes page to make it easy to share your memories.

Judith Ann Smith (Judy) 68 of Sentinel , Oklahoma was born on...