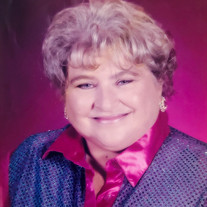 Juanita Louise (Bolding Mobley) Hughes, 70, of Cordell, Oklahoma passed away peacefully on August 15th, 2021 at the Integris Hospice House in Oklahoma City, Oklahoma. She was born on August 8th, 1951 to Louis Jefferson and Clara Geneva (Chadd) Bolding in Cordell, Oklahoma. Juanita grew up and attended school in Cordell and graduated from Cordell High School in 1970. She married Odell Wayne Mobley on December 9, 1972. They made their home in Oklahoma City and Elk City until his passing in 1992. Juanita married Fred Hughes on August 12, 1997 in Elk City, Oklahoma. They lived in Elk City until 2003, then moved to Sayre, Oklahoma where they lived until the time of his death in 2005. She later moved back to her hometown of Cordell, OK where she lived until her death. She worked in manufacturing, cafes, insurance companies, Schwartz Drug of Cordell, Wal-Mart of Elk City, and the Sayre Hospital. She retired from her position in housekeeping at the Great Plains Hospital in Elk City after working for 25 years. Juanita was a member of the Fairview Baptist Church in Elk City for many years. She later attended the Herald Mennonite Church in Corn. Despite not having children of her own, she poured her heart into working with children. She worked as a Sunday school teacher, volunteered her time many summers for Vacation Bible School, was a leader for the Girl Scouts, and volunteered many years at church camps. She also surrounded herself with the art that she loved. She loved painting, photography, cooking and music. She was a prolific painter and won many ribbons, including quite a few blues, at the Washita County Fair every year that she entered her paintings. She sang in the choir at her church for many years and was previously a member of the Art Guild of Elk City. She was a true artist. She will be deeply missed by all who knew and loved her. Juanita is survived by two-step children Chris Hughes and wife Linda of Sayre, OK and Marlene Johnson and husband Rick of Chico, CA; 10 step grand-children and 10 step great grand-children; her sister Ethel Isbell and husband Gene of Clinton, OK; her brother Jaydee Knauf and wife Donna of Grandview, AR; her brother-in-law Earl Schmidt of Cordell, OK and her sister-in-law Carol Bolding of Tulsa, OK and a host of nieces, nephews and dear friends. She was preceded in death by her parents, Louis and Clara Bolding; two husbands, Odell Wayne Mobley and Fred Hughes; an unnamed infant child; her step-son Corey Hughes, two brothers Darrell Bolding and Carroll Bolding and three sisters Charlotte Schmidt, Geraldine Shepherdson and Oleta Powell. Services for Juanita will be held on Friday, August 20, 2021 at 2:00 p.m. at the Herald Mennonite Church in Corn, OK. Interment will follow at the Carter Cemetery in Carter, OK.

The family of Juanita Louise Hughes created this Life Tributes page to make it easy to share your memories.