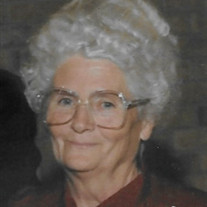 Idell Madden Holman was born to Millard and Ida Madden on November 21st, 1933 at Elk City, OK and passed away July 6th, 2019 at the age of 85. She was the youngest of eleven children. Growing up, Idell lived in Oklahoma and Arkansas. She attended school at Merritt , OK where she loved playing basketball and softball. She was heartbroken when her parents told her they were moving to Arkansas. She hated leaving her school and friends. Idell returned to Oklahoma to visit her sister Pauline. During the visit she was helping Pauline clean the church. Idell was standing by the pulpit when Charles Holman walked in . He said "Looks like we've got a new preacher!" Charles and Idell dated for a while, and even though it became serious, they decided it wasn't going to work out. She returned to her parents in Arkansas, but was unhappy. Pauline sent Idell money to come for another visit. Idell's feelings for Charles hadn't changed and neither had his for her. Charles proposed to Idell on Rocky Lake. He asked her if she would like to go to the army with him. He would smile and say "I didn't ask her to marry me, I just asked her if she wanted to go to the army with me!" Charles and Idell were married on August 28, 1952. They had six children, Dwan, Vickie, Gayla, Dixie, Lanny, and Hilda. Vickie died when she was 4 months old. Idell worked with Charles all her life in any way he needed. In the army, she ironed clothes for the other military to earn money. After the army they went to Colorado with other couples to work picking fruit. During their farming years, Idell worked in the fields with Charles. She chopped cotton and her children sat playing at the end of the row until they were old enough to help. In the fall, she pulled cotton. Later when Charles bought a cotton stripper, she and the children would ride in the cotton trailer spreading the cotton. Idell's days in the field came to an end when Dwan learned to drive. Charles had promised her she could stay home. Idell was a very good seamstress, not by choice, but by necessity. Times were hard and they had five children to feed and clothe. Idell's mother would send flour sacks from Arkansas. In those days the sacks were made of printed fabric and never went to waste. Idell would make clothes for her children from those sacks. Her favorite TV show was Gunsmoke. She watched it every Saturday night. As she watched the show, she would be sewing or curling the girls hair for Sunday. When Idell was forty-four she lost another daughter, Gayla, who was only twenty-one. Losing another child was almost more than she could bear. Idell was an avid gardener. She would spend many hours canning fruits and vegetables and always had the cellar full for winter. She loved to work outside and her yard was filled with many beautiful flowers. She loved to mow her yard and was still using a push mower in her seventies. Idell would also help Charles by doing secretary work for the metal building business he had started. Charles and Idell loved to travel in their motor home. Many trips were made with her sister and brother-in-law, Pauline and Elmer Humphreys, as they traveled in separate RV's. This was before cell phones, and they loved to tell stories of getting separated from each other, but managing to meet up again later without being able to communicate with each other very well. Charles and Idell were married for fifty-nine years. Idell would jokingly tell her children, "I came for a two week visit and I'm still here." Later in life, Idell developed Alzheimer's. After Charles's death in 2012, she was to the point of needing around the clock care. Charles had promised he would never put her in a nursing home. He had even written to an army buddy and told him that he would take care of her as long as life permitted. After his death, their daughters became her caregivers. Even though Idell's mind had returned to the past, she would sometimes give them a hug and say "I love you." Her daughters were glad they were there to share those moments with her. She knew she was loved, and her daughters were happy to be able to care for her until God called her home. Idell was preceded in death by her husband Charles; 2 daughters, Vickie Holman and Gayla Humphrey; 1 son, Lanny Holman; her parents, Millard and Ida Madden; brothers, Roy, Wayne, Woodrow, Truman, and Millard Jr.; sisters, Naomi, Dorothy, Wilma Jean, Pauline and an infant named Baby; and 2 grandchildren, Jackie Ray Holman and Wyatt Folks. Idell is survived by her daughters, Dwan Elston and husband Dickie, Dixie Byrd and husband Brad, Hilda Humphrey and husband Keith, all of Rocky, OK, 13 grandchildren, 21 great grandchildren and 1 great-great grandchild. Funeral: 10:00 a.m., Wednesday, July 10, 2019 Ray & Martha's Funeral Home Chapel Cordell, Oklahoma Interment: Lone Star Cemetery Rocky, Oklahoma

Idell Madden Holman was born to Millard and Ida Madden on November 21st, 1933 at Elk City, OK and passed away July 6th, 2019 at the age of 85. She was the youngest of eleven children. Growing up, Idell lived in Oklahoma and Arkansas. She... View Obituary & Service Information

The family of Juanita Idell Holman created this Life Tributes page to make it easy to share your memories.

Idell Madden Holman was born to Millard and Ida Madden on November...