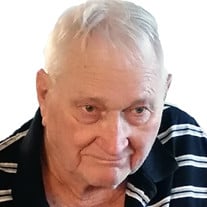 Josh Powers was a mountain of a man. No other description is as fitting. John Cleveland Powers, age 84, of Carnegie, better known as Josh Powers or simply J.C., passed from this life on October 5, 2020, at the Binger Nursing Home, in Binger, OK. He was born on November 18, 1935 to James Berry and Edna Mildred (Hale) Powers in Chickasha, Oklahoma. He grew up in the cotton fields of Oklahoma during the Dust Bowl era, and moved with his family from place to place until they settled in the Carnegie area. He was surrounded at all times during his early years by his extended family, especially by his cousins, James and Buck Boyd. The stories of his life from the early years passed onto later generations as a great deal of good times and living life to its fullest happened to all of them. During his teenage years, beyond working in the fields around Carnegie with his father and family, he was known for catching record-breaking catfish in the Washita River on bank poles and trotlines. A story in The Carnegie Herald when he was 15 years old told of his catching a 45-inch catfish that fed 22 people the following weekend. He attended school in Carnegie, where he played basketball, and graduated from Carnegie High School in 1953. He became a championship bodybuilder in his years after high school, and was one of two contestants from Oklahoma for Mr. America in Kansas City. One night while on Main Street in Carnegie, he noticed a young woman, Carolyn Sue Davis, and decided she was the prettiest thing he had ever seen. He married her on January 11, 1961. To this marriage was born three children, Sheila Deanne, John Cleveland, and James Curtis. Josh's entire life was spent farming. Year after year, he grew crops of cotton, alfalfa hay and vegetables, most notably watermelons, cantaloupe and pumpkins. He sold them to local grocery stores, farmers markets, and in his later years at the 4-way in Carnegie. On weekends, he would often drive to Lawton, to set up on the corner of Lee & Sheridan to sell to people there as well. If you knew him, you also knew of his passion for politics and debate. There was no issue he didn't have an opinion on, and he loved to spar with his words and ideas. If you disagreed with him, you would be subject to fierce and unfiltered dialog. If you agreed, he would ally with you as a partner. But in everything, he was fair and remained friends with everyone. Josh also had a love for movies. He loved watching westerns, most notably the films "Shane" or "The Violent Men", or anything with John Wayne or Clint Eastwood. Several Hitchcock films were also favorites of his, as well as watching 007� James Bond! His family anticipated every Christmas Eve where he would chuckle and laugh through the entire running length of Christmas Vacation. It was as funny to watch him watch the movie as to watch the movie itself. In his later years, Josh welcomed the arrival of his eight grandchildren. He became known as "Poppy" to both them and all of their friends and families. He endeared himself to each of them in their own special way. He was known for attending their plays, ball games, and any other event they were in. In his final years of life, he lived at the Carnegie Nursing Home, where he formed many special friendships with the staff, his roommates, and others who lived there. He was preceded in death by his parents, and his wife Carolyn. He is survived by his three children, daughter Sheila Deanne and husband Gerald Peters, of Carnegie, son John Cleveland and wife Wende (Holloway) Powers, of Yukon, and son James Curtis Powers, of Carnegie, as well as his grandchildren Lynsey (Peters) Beeman and husband Aaron, of Carnegie, Jereme Powers of Oklahoma City, Grady Peters of Oklahoma City, J.P. Powers and wife Krystal of Mustang, Sydne Peters of Weatherford, Luke Powers of Norman, Mory Peters of Carnegie, Oakley Peters of Carnegie, his great-grandchildren Kynlee Peters, Myles Peters, and Isabelle Powers, as well as special cousins, countless friends and acquaintances who knew of him all across the region. There were so many places he went, selling melons, pumpkins, and vegetables, that have been empty of his smile, laugh, and warm-hearted soul for many years. He fought the battle of age, yet he always missed and wanted to be out working in the field and selling his crops to people who loved not only his produce, but also his wit and incredible personality. He never met a stranger, and would be a friend, and help out anyone. In his final days of this life, he was surrounded by his family, as he left to meet his Savior. To all of the people who remember him and have memories of his life, please share them with each other. That's the way he would want it for all of us: to be smiling, laughing, and remembering his life together. The family invites you to both visit the funeral home, where you can sign the guest book and view pictures and a video of Josh's life and family, and join us outside for a celebration of life that will be held on Saturday, October 10, at 11 AM in the fields of the Washita River bottom northeast of Carnegie, where he farmed his entire life. His remains will be scattered across the land and river he loved and devoted his life's work to. Services are under the direction of Ray & Martha's Funeral Home, Carnegie.

Josh Powers was a mountain of a man. No other description is as fitting. John Cleveland Powers, age 84, of Carnegie, better known as Josh Powers or simply J.C., passed from this life on October 5, 2020, at the Binger Nursing Home, in Binger,... View Obituary & Service Information

The family of John Cleveland Powers created this Life Tributes page to make it easy to share your memories.

Josh Powers was a mountain of a man. No other description is...