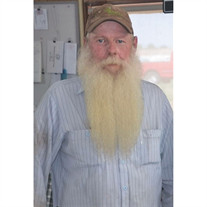 John Thomas King Jr., 57, passed away unexpectedly on October 7th, 2019. He was born on September 18th, 1962 to John Thomas Sr., and Mary Jo (Carmichael) King in Sentinel, Oklahoma. John grew up and attended school in Sentinel, graduating from Sentinel High School in 1980. He met the love of his life Terri Palmer and they married on April 18, 1985 in Vernon, Texas. He had three daughters; Katrina, Jamie, and Whitney. John was a hard worker. He spent his working life farming. He also worked for Sentinel Western Producers Co-op presently, Wootton New Holland in earlier years. He was also a volunteer Fireman and drove Tanker 5. He felt it was an honor and privilege to serve on the Fire Department. John was a member of the United Methodist Church. He loved serving his Lord and singing in the choir. In his spare time he liked to fish and watch old TV shows like Gunsmoke and Bonanza. But more than anything he loved being with his wife, daughters and granddaughters. He even loved the granddogs. John will be deeply missed by all who knew and loved him. Survivors include his wife Terri King of Sentinel, OK Daughters: Katrina King of Weatherford, OK Jamie McDaugale of Retrop, OK Whitney King of Sentinel, OK Granddaughters: Genysis King of Weatherford,OK Kaisyn McDaugale of Rocky, OK Granddogs: Skittles, Delilah, Fathead, and Letty Sisters: Nancy Robinson & husband Ronnie of Fort Smith, AR Kristi Fender & husband Mark of Merritt, OK Numerous Nieces, Nephews and other family members. In lieu of flowers donations can be made to the Sentinel Fire Department. Memorial Service: 2:00 p.m., Tuesday, October 15, 2019 United Methodist Church Sentinel, Oklahoma

The family of John Thomas King created this Life Tributes page to make it easy to share your memories.