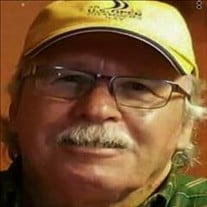 Joe Pat Askew Born May 13, 1950 in Hobart, OK to Fern Pierce Askew and Rendall D. (Jack) Askew. He departed this life on earth January 10, 2021 in Little Rock, Arkansas. Raised on our family acreage in Midwest City, OK Joe attended Carl Albert High School where he participated in athletics and FFA. His senior year he moved to Mountain View, OK where he attended Mountain View High School and played football with the Class of �69. His love of fishing and hunting began at a young age on or near family farms and ranches in and around Mtn. View and Saddle Mountain. After high school his independent spirit and sense of adventure lead him through many occupations. Leaving OK in his 20s for Arkansas in 1977 it became home. Joe lived life on his own terms and to the fullest, one day at a time, not one to worry where his next pay check might come from. If he could be playing pool at his "office", golfing, fishing, hunting, or just being at deer camp with buddies, this was paramount. An avid sports fan, he especially loved the Hogs, Dallas Cowboys, Texas Rangers or OKC Thunder. If he couldn't be attending games he was on the phone with family and friends giving commentary. His early years in Arkansas are when he discovered his love of quarter horses, working as foreman on several different ranches raising, breeding and showing horses. He was proud of the Champions they produced. After leaving ranching, he started his first business, Alfalfa Hay Haulers, while living at Flat Rock in a tiny cabin on the Piney River. This was when his biggest and most rewarding part of life began, the birth of his only daughter, Jessica. He then established River Valley Striping and worked all over the state for the next 20 plus years. After closing that business he obtained his Vehicle Transport licenses driving for various dealerships. Traveling the U.S. he always had tales to tell and shared the sights he was enjoying along the way. This job also afforded us many visits when he would be coming through to stay the night or meet for lunch. Joe is survived by his daughter, Jessica Askew Russo, one grandson, Blayden Russo of Russellville, AR; his brother, James Dirickson (Butch) and sister-in-law, Mary Ann of Arlington, TX; sister, Kim and brother-in-law, Gary Knight of Harrah, OK; sister Jayne and brother-in-law, George Woerner of Russellville, AR. Nieces Robyn Wood, Dee Dee and spouse, Troy Trueblood; Kayley Marshall, Taylor Knight and Megan Knight. Nephews Zachary Woerner and spouse, Teryn and Lance Woerner; great nieces Peyton Trueblood and Kinslee Trueblood and one great nephew, Ryder Marshall. We can't forget his companion cat, Pepe. He loved us all so much and if it meant hitching a ride, taking a bus or driving a borrowed car he and Jess made every family event. Our great memories of beach trips, hunting and fishing trips, golfing trips, mountain trips or sitting on the porch will last us a lifetime. A private graveside service was held Friday, January 15th at Green Valley Cemetery, Mtn. View, OK through Ray and Martha's Funeral Home, Mtn. View, OK. Memorial Donations in Joe's name may be made to the Green Valley Upkeep Fund, c/o Shamrock Bank, 200 W. Main, Mtn. View, OK 73062 or the Mtn. View Cemetery Upkeep Fund, c/o City Hall, 321 Main Street, Mtn. View, OK 73062 or a foundation or fundraiser of your choice.

The family of Joe Askew created this Life Tributes page to make it easy to share your memories.