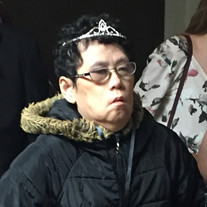 Joanne Kyung-Soo Richichi, age 49, passed away on July 24th, 2020 after a five-week battle with COVID-19. Joanne was born in South Korea and was adopted and came to the United States when she was an infant. Her three loving brothers embraced her fully, helping her with her intellectual disability and showering her with love and kindness always. Joanne moved around the country with her parents, from Brentwood, New York, to Oklahoma City, Oklahoma; Hamilton, Virginia; Millville, New Jersey; Grand Forks, North Dakota; and then to Norman, Oklahoma. In each place she received special education services, and while her abilities were limited, she was able to learn to do basic reading, writing and math. As she grew in age, she also grew in wisdom and an increased empathy and love for all. While her brothers did not always follow her when the family moved, they stayed in close touch and visited when they could. In Norman, Oklahoma she was eventually reunited with her two oldest brothers. Joanne eventually became a resident of a group home run by the Center for Family Love in Kingfisher, Oklahoma; where she lived somewhat independently and worked in various jobs, as well as made numerous friends. She visited her family frequently for holidays and birthdays, at times her youngest brother joining from New Jersey as well. Joanne was a beautiful, loving person, who always had a hug for anyone who needed it. Her loves were those of many young children�cartoons, toys, stuffed animals. She also loved animals of all kinds, especially her brothers' pets. In the final years of her life she became a resident of the Independent Opportunities group home in Enid, OK. She sadly contracted COVID-19 shortly after her first trip outside of her home for emergency dental work. The family is grateful to IOI and to Integris Health Care in both Enid and Oklahoma City who provided excellent care until her death. She is predeceased by her mother, Rosemarie. She is survived by her father, Geatano; and her brothers, Paul (Catherine) and Michael (Sherry McBride). Tragically, her brother Stephen Richichi died suddenly two days after her passing. She is also survived by many nieces and nephews. A joint Memorial Service to honor Joanne and her brother Stephen will be at St Joseph's Catholic Church in Norman, OK at 10:30am on Wednesday, August 5th. The service will be live streamed on the Facebook page of the church, https://facebook.com/stjoes/. In lieu of flowers, a collection is being made for funeral expenses and a donation in the family's name to The Center of Family Love, more information at �� https://www.gofundme.com/f/help-oklahoma-family-with-funeral-services .

Joanne Kyung-Soo Richichi, age 49, passed away on July 24th, 2020 after a five-week battle with COVID-19. Joanne was born in South Korea and was adopted and came to the United States when she was an infant. Her three loving brothers embraced... View Obituary & Service Information

The family of Joanne Kyung-Soo Richichi created this Life Tributes page to make it easy to share your memories.