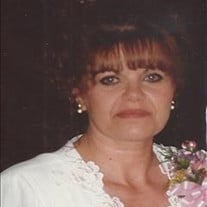 Jerrie Sue Pearson was born on June 24, 1950 in Cordell, Oklahoma to Jerry and June Smith. She left his world on May 29, 2020. Jerrie Sue was a 1968 graduate of Lone Wolf High School. She then attended beauty school and began her career as a beautician. Jerrie Sue worked many years as a beautician and then her interests led her to become a house manager at Searchlight in Hobart. She also worked as an organizer for the Billy Graham Crusade. Jerrie Sue's favorite job was working as a full time Nana which she enjoyed until her death. Jerrie Sue was crazy about her grandchildren and her crazy was on full display at her grandchildren's extracurricular activities. She was often referred to as a "fireball" due to her animated cheering and yelling for her grandchildren. You always knew when Jerrie Sue was in attendance. Jerrie Sue married Sam Dlungonski in April of 1975. Though their marriage ended, their special friendship continued until her death. Knowing how Jerrie Sue loved to torment Sam, it will probably continue even longer. Jerrie Sue's first love was her children and grandchildren, but her love for animals ran a close second. Jerrie Sue's animal obsession began at a young age. Her pets ranged from alligators to skunks to raccoons and even wolves. Basically, anything she found she brought home to love. When Jerrie Sue left this world, she left behind her precious fur babies Liberty Bell, Luna and Diamond. Jerrie Sue's passion was not only for animals but for people as well. Jerrie Sue never met a stranger and was known for opening her heart and home to anyone needing a hand up. She is survived by her daughters Robin Harris of Hobart and Mindy Cunningham and husband, Brian, of Sentinel. She also leaves behind her sister, Dorecia Tepe and husband, Jimmy, of Lone Wolf. Jerrie Sue is also survived by five grandchildren: Daisha Harris of Ashburn, Va; Gunnar Harris of Weatherford, Ok; and Jett, Jax and Harley Cunningham of Sentinel; one nephew, Jerry Paul Tepe and wife, Amber, of Lone Wolf, Ok; one great niece, Jerra Jo Tepe of Lone Wolf,Ok; two great nephews, Mason and Levan Tepe of Lone Wolf, Ok; and numerous friends who were very dear to her. Jerrie Sue was preceded in death by her parents, Jerry and June Smith; one daughter, Kristi Rozell; one granddaughter, Afton Rozell; and one nephew, Philip Tepe. Memorial Service: 2:00pm Wednesday, June 3, 2020 Ray and Martha's Funeral Home, Hobart, OK Under the direction of Ray and Martha's Funeral Home, Hobart

Jerrie Sue Pearson was born on June 24, 1950 in Cordell, Oklahoma to Jerry and June Smith. She left his world on May 29, 2020. Jerrie Sue was a 1968 graduate of Lone Wolf High School. She then attended beauty school and began her career as a... View Obituary & Service Information

The family of Jerrie Sue Pearson created this Life Tributes page to make it easy to share your memories.