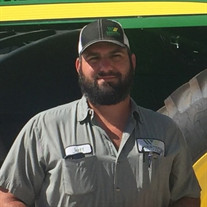 Jeff Brower was born April 7th, 1981, the son of Grant and Ann Brower of Anadarko and the grandson of the late Jack and Alyce McLane of Verden and Neff and Avis Brower of Anadarko. Jeff passed away on Tuesday, November 24th at the Stillwater Medical Center after a short battle with Covid 19. He attended high school in Anadarko. Jeff was an active 4-H and FFA member where he participated in speech contest, livestock shows and leadership trainings. He received his state FFA degree in 1999. He also worked along side his parents and sister with their farming and ranching activities. During his junior and senior year of high school he attended the Caddo-Kiowa Vo-Tech in the evenings where he earned his EMT and volunteer fire fighter certifications at barely the age of 18. Jeff enjoyed being a volunteer firefighter on the New Hope Fire Department before moving to college. He graduated with honors from Anadarko High School with the class of 1999. After High School he attended Oklahoma State University in Stillwater, OK. While obtaining his degree he worked as an EMT at numerous OSU events. On the weekends you could either find him enjoying time with his friends on "The Strip" or home helping his family farm and ranch. Jeff graduated from Oklahoma State University with a Bachelors of Science in Fire Protection and Safety Engineering. He is a proud OSU Alumni Association Lifetime member. The best honor he received was on March 17th, 2011 when he received the new job title as "Daddy" to his baby girl Lynlee Ann Brower. Farming and ranching had always been a passion of Jeff's. in 2014 he joined Western Equipment in Weatherford, OK where he quickly advanced to John Deere Master Technician. He was well known across Oklahoma and surrounding states for his skills and dedication in serving the farming industry. Jeff was a citizen of the Delaware Nation. His favorite hobbies were spending time with his friends, cattle and loved ones. He is survived by his daughter Lynlee Ann Brower of Geary; wife Sonya Williams Mitchell of Hydro; Stepson Layne Alexander Mitchell of Weatherford; K-9 companion Axel; Parents Grant and Ann Brower of Anadarko; sister and brother in law S.L. and Jenna Craft of Anadarko; Nieces and Nephews Tucker, Ramsey, Caddo and Teddi Craft of Anadarko; Aunt and Uncles Jackson & Lauri McLane of Anadarko; Linda McLane of Anadarko, Scott and Paula Brower of Anadarko, David and Brenda Allen of Broken Arrow and numerous cousins. Funeral: 11:00 a.m., Saturday, November 28, 2020 First Baptist Church, Anadarko Burial: 12:00 p.m., Saturday, November 28, 2020 Memory Lane Cemetery, Anadarko Visitation: 11:00 a.m. ~ 8:00 p.m., Friday, November 27, 2020 Ray & Martha's Funeral Home, Anadarko Under the direction of Ray & Martha's Funeral Home, Anadarko, OK

Jeff Brower was born April 7th, 1981, the son of Grant and Ann Brower of Anadarko and the grandson of the late Jack and Alyce McLane of Verden and Neff and Avis Brower of Anadarko. Jeff passed away on Tuesday, November 24th at the Stillwater... View Obituary & Service Information

The family of Jeffrey Grant Brower created this Life Tributes page to make it easy to share your memories.