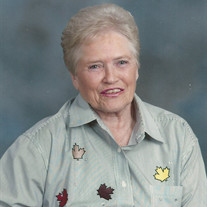 Jeanean Dees passed away peacefully on October 7, 2021. she was born April 28, 1934 to John and Esther (Kirkpatrick) Lemon in Hobart, Oklahoma. She was the second of 3 children. While growing up in Hobart, Jeanean was active at school, where... View Obituary & Service Information

The family of Jeanean Dees created this Life Tributes page to make it easy to share your memories.