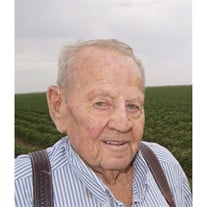 James Fred "Bub" Smith age 88, of Mangum, Oklahoma, passed away Sunday, December 31st, 2017 after a brief illness. He was born the son of Everett A. and Juanita (Kelley) Smith January 15th, 1929 in Hester, Oklahoma. He was a 1946 graduate of City View High School and a veteran of the US Air Force, serving in the Korean War from 1950-1954. He received a United Nations service medal and National Defense Medal while there. After the service, he returned to Mangum and began his career in farming, until his retirement in 2015 growing mostly cotton, but also some wheat. He married Patsy Freeze on May 6, 1956 and they were lifelong residents of Greer County, and also served on the South Gin Board. James' survivors include: His daughters Malenda and husband Jim Bob Brooks of Mangum, OK Jeanenne Downing of Lubbock, TX His sister Maxine Chambers of Mangum, OK His brothers Alan and wife Elva Smith of San Antonio, TX Kenneth and wife Murlene Smith of Mangum, OK His grandchildren: Kerry Mills of Mangum, OK Logan Downing of Dallas, TX Carson Downing of Lubbock, TX Great Grandchildren: Kelsey and McKenzie Mills. and his aunt, Francis Herron. He was preceded in death by his wife, Patsy Smith, and his sister, Charlotte Northington Hoskins. Visitation will be held Wednesday, Jan. 3, 2018 from 9am to 8pm with family available to receive friends from 6 to 8 pm at Ray and Martha's Funeral Home in Mangum, Oklahoma. Funeral Services will be Thursday, Jan. 4, 2018 at 11am at the Historic 1st Presbyterian Church, 314 N. Oklahoma Ave., Mangum, Oklahoma, with interment to follow at Rose Lawn Cemetery. Those that wish may make contributions in lieu of flowers to the American Diabetes Association or to the American Cancer Society. Forms are available at the Funeral Home. Arrangements are under the care of Ray & Martha's Funeral Home, Mangum, Oklahoma.

James Fred "Bub" Smith age 88, of Mangum, Oklahoma, passed away Sunday, December 31st, 2017 after a brief illness. He was born the son of Everett A. and Juanita (Kelley) Smith January 15th, 1929 in Hester, Oklahoma. He was a 1946 graduate of... View Obituary & Service Information

The family of James Fred Smith created this Life Tributes page to make it easy to share your memories.