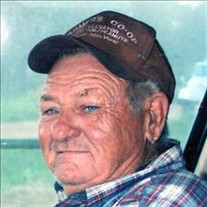 James "Jim" Harley Shaw, 83, was born on October 5, 1937 to William "Bill" Shaw and Alice (Stephens) Shaw in Alfalfa, Oklahoma. James passed away on January 26, 2021 surrounded by his loved ones at his home in Alfalfa, Oklahoma. Jim grew up in the area of Alfalfa helping his father with Custom Harvesting, where they traveled all the way to the Canada line. While gone at school, Jim met the love of his life, Wanda Setzer. After graduating in 1956 from Alfalfa High School, Jim continued to help his dad with custom combining. He also attended a year's worth of classes from Southwestern Oklahoma State University in Weatherford, Oklahoma. On April 3, 1958 Jim and Wanda were married in Anadarko, Oklahoma. They moved to Beatrice, Nebraska where they lived for about two years, while Jim worked on irrigation gear heads in a machine shop. They then moved to Lubbock, Texas where he continued working in a machine shop before finally moving back to Oklahoma. They moved to Alfalfa on the west side of the road where the old telephone office was located before moving onto the east side in 1963. Jim started custom harvesting in 1960 with his own equipment. By this time, Jim and Wanda had three children - the last one being born in 1965. Summers were busy on the road. Winter time was made up of coyote hunting, playing dominoes, woodworking, odd jobs here and there, and keeping up with the children's activities. Jim was a Boy Scout leader that started in Alfalfa. Jim was on the Alfalfa School Board and was a volunteer for the Alfalfa Fire Department. When Jim and Wanda's children started graduating from Alfalfa and started going to Eakly, they were class parents for several years for all of the children. Jim and Wanda got involved with activities at Eakly. They helped run the scoreboard for basketball games and helped their children with all of their projects. In 1988, Jim retired from custom harvesting and turned it over to his sons. Wanda and Jim went on the road to sell their woodworking, ending up in Las Vegas, Nevada where they worked at Goodyear Tires for two years, as well as, a security guard for the casino for a year. They went back on the road traveling and selling their woodwork before finally settling back down in Alfalfa in 1994 when Jim went to work for Gary Woodruff in 1997 on a farm. Jim still had time to go camping and fishing with his grandkids, nieces, nephews, and other family members. He would often travel south with his brothers and sisters. He was also a very large part of the community. In 2019, Jim retired, still played dominoes, fished, played lots of board games with family, and was loved by all. Jim is survived by his wife, Wanda (Setzer) Shaw of the home; two sons, Stanley Shaw of Alfalfa, Oklahoma, JD Shaw and his wife, Shelly of Weatherford, Oklahoma; two daughters, Renee Shaw of Mountain View, Oklahoma, Tina Shaw of Alfalfa, Oklahoma; one brother, Javan Shaw and his wife, Gail of Alfalfa, Oklahoma; one sister, Jan "Tootsie" Skaggs and her husband, Grover of Oney; one brother-in-law, Paul Kittridge of Mustang, Oklahoma; two sister-in-laws, Evelyn Shaw of Fort Cobb, Oklahoma, Coletta Shaw of Oklahoma City, Oklahoma; seven grandchildren, Kylie Shaw Cooper of Midland, Texas, Stanton Shaw of Tulsa, Oklahoma, Todd Shaw of Carnegie, Oklahoma, Jaden Shaw of Carnegie, Oklahoma; Kaleb Powell of Alfalfa, Oklahoma; Tamra Gober and her husband, Gregg of Brooklyn, New York; Tanae Shaw of Oklahoma City, Oklahoma; five great-grandchildren; several nieces and nephews. Jim is preceded in death by his parents, Bill and Alice Shaw; brothers, Edward Shaw, CW "Son" Shaw and his wife, Norma, and Robert "Bob" Shaw; sister, Wanda Faye Kittridge; brother-in-law, Bill Smith; nephew, Mark Shaw; niece, Beverly Flatt. Memorial services for Jim have been postponed until further notice due to inclement weather.

The family of James Harley Shaw created this Life Tributes page to make it easy to share your memories.