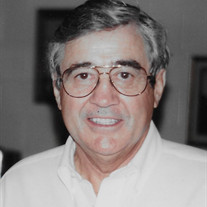 James "Gene" Longwith, 89, of Cordell, Oklahoma passed away unexpectedly on December 28th, 2020 at the Cordell Memorial Hospital. He was born on June 3, 1931 to Ray and Bernice Clemintine (Leach) Longwith in Bluejacket, Oklahoma. Gene grew up in Bluejacket and attended the Crutcho School and then Northeast High School, Oklahoma City, graduating in 1950. Gene then served in the United States Army from 1953-1955, and when he returned to the home farm he joined his father in the Longwith Dairy family business until 1960. Gene married his first wife, Delores McColey, in 1957 and they had four children. In 1963, they moved to Enid with the first three children, where Gene began working as a Livestock Inspector for the USDA. They lived in Enid for about 14 years and after receiving a promotion with USDA, moved to Littleton, Colorado. Gene married Martha Kilgore-Alles, in June 1982, and continued to receive promotions with USDA that took them to Maryland, where he retired in 1991. After retirement, Gene and Martha moved to Hillsboro, Kansas where he drove a school bus for seven years, and then moved to Cordell in 1998. Gene was a member of the Masonic Lodge and VFW. He was a very personable gentleman who loved being with his family and had an all-around love of the outdoors and animals, loved watching and coaching several different sports, was an avid OSU fan, and enjoyed gardening, relaxing after retirement, and making new friends. He will be deeply missed by all who knew and loved him. Survivors include his wife Martha Longwith of Cordell, OK, and his children, Terrell Longwith and wife Annette of Spring, TX, Brenna Longwith of Highlands Ranch, CO, Keith Longwith of Arvada, CO, Karen Maxwell of Littleton, CO, Greg Kilgore and wife Wendy of Cordell, OK, and Marla Jackson of Cordell, OK, deceased. Gene is also survived by eight grandchildren and eight great-grandchildren. Preceded in death by his parents, Ray and Bernice Longwith. Memorial Service will be held later in the spring

The family of James E Longwith created this Life Tributes page to make it easy to share your memories.