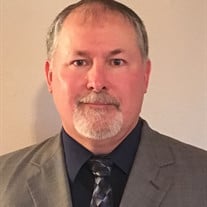 James Kenneth Downs, 58, of Clinton, Oklahoma passed away unexpectedly on November 22nd, 2020. He was born on June 11, 1962 to James Leo and Sandra Kay (Kilpatrick) Downs in Shamrock, Texas. Kenny grew up and attended school in Erick, OK, graduating from Erick High School in 1980. After graduation Kenny attended SWOSU and received his Master's Degree in Education. He met is former wife, Jennifer while attending school in Erick. They had one son together, Brent Downs. Kenny met DFawn Burns and they were united in marriage on March 16, 2003 in Erick, OK. Kenny spent many years in the Arapaho School System as a teacher and Principal. He enjoyed farming, restoring classic vehicles and working on old trucks. Kenny enjoyed attending OU games, tailgating with friends and watching the games at home. He was an accomplished guitar player and enjoyed writing and singing songs. He loved spending time with friends, boating, target practice and just having cookouts. His 4 grandchildren were his world and he loved being outside with them playing trucks and giving tractor rides. Kenny spent numerous hours with his dad working on old trucks. He was a devoted family man, husband, father and Grumpy to his grandkids. He was a man of few words, but those words were powerful and had the ability to change the lives of those around him. Kenny was fair, honest and his character was unrivaled. He will be deeply missed by all who knew and loved him, especially his family. Survivors include his wife DFawn of the home in Clinton, OK Son: Aaron Burns & wife Courtney, their children Tinlee, age 10 and Kit age 2 of Weatherford, OK Son: Brent Downs & wife Abby, their children Adrian, age 8 and Tatum, age 2 of Cordell, OK Parents: Jim and Sandra Downs of Clinton, OK Brother: Todd Downs & wife Stephanie of Burns Flat, OK A scholarship fund benefiting Arapaho-Butler students has been established. Donations to this fund may be made to: The Kenny Downs Memorial Scholarship Fund Care Of Bank of the West Visitation: 9:00 a.m. ~ 8:00 p.m., Tuesday, November 24, 2020 Ray and Martha's Funeral Home Cordell, Oklahoma Funeral: 11:00 a.m., Wednesday, November 25, 2020 Arapaho School Gym Arapaho, Oklahoma Private Family Burial: Arapaho Cemetery Arapaho, Oklahoma

The family of James Kenny Downs created this Life Tributes page to make it easy to share your memories.