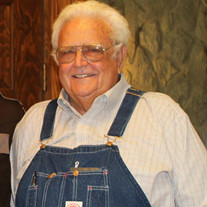 Jacob Lester Hunn, 78, lifelong Hobart resident, passed away Tuesday, October 26, 2021. Jake was born on February 10, 1943, in Hobart, Oklahoma, the son of Millard "Sonny" and Nora Belle (Everhart) Hunn. At the age of sixteen, with permission from his mother, Jake enlisted in the United States Army National Guard. He graduated from Hobart High School in 1961. Jake married Sally Carter at his parents home in Hobart on February 14,1964, to this union two children were born, Lana and Jay. At the young age of twenty-one, Jake became a tank commander. This was his favorite job. After just nine years, he worked his way through the ranks to become a 1st Sgt, becoming the first 1st Sgt. at Frederick's National Guard Armory. Jake served for twenty years and then entered the inactive reserves retiring just before 9/11 from Altus National Guard. In his early years, Jake worked at his father's and Uncle BF's tire shop. It was then that he started helping his uncle roof. After a few years, Jake went out on his own and began the Hunn & Son Roofing Company foaming and roofing many local and out of state commercial and residential properties. He was an accomplished pilot, having many airplanes which he used to fly to jobs in Texas and New Mexico. Jake had a passion for farming and ranching. His cattle were more like pets to him. On October 31, 2008, Jake married Shirley O'Niels in San Antonio, Texas. She was the love of his life. She preceded him in death on October 31, 2013. Jake enjoyed spending time on his farms and being with his family. Survivors include: his daughter, Lana Branch and husband Chris of Hobart; son, Jay Hunn and wife Kathy of Eufaula; sister, L'Nora Barger and husband Lanny of Granite; grandchildren, Seth Miller and wife Kindrah, Drew Miller and wife Whitney, Mercedes Gilliland and husband Todd, Jacquelynn Vorsane and husband Dillion, Jake Hunn and fiance Shyla, Josh Hunn and Cameron Branch; his great grandchildren, Aiden, Jayla, and Benton Miller, Sage, Sunny and Kalli Miller, Kollin and Coraline Gilliland and Joji Vorsane. He is also survived by nieces Rhonda Hanlin, Kim Zachary and Lisa McClure, a host of great nieces and nephews and a sister-in-law, Judy Serpas. He is preceded in death by his parents, his wife, Shirley, and a great grandson Seth Miller II.

The family of Jacob Lester Hunn created this Life Tributes page to make it easy to share your memories.