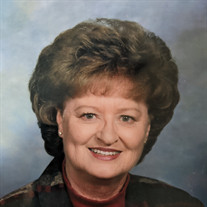 Juanee (Jones) Pittman was born on November 23, 1939 in Chimes, Arkansas to Harley Clarence Jones and Oma Nola (Holsted) Jones. She was the fourth of eight children. Juanee passed away on Thursday, April 21, 2022 at the Carnegie Hospital. Shortly after being born, Juanee moved to Carnegie, Oklahoma with her family, where she graduated from Carnegie High School in May of 1957. On December 28th of the same year, she married Calvin (Doc) Pittman. To this union was born one son, Richard (Rick) Calvin Pittman on August 8, 1958. Juanee was mostly known through her customers at Carnegie Cleaners. Doc and Juanee purchased the cleaners in 1974. While using her talents of altering, sewing, and pressing clothes, Juanee was devoted to caring for everyone who walked through the door. Juanee continued to serve her customers at the cleaners until the last few months of her life. With all of her heart, Juanee loved her Lord and Savior, Jesus Christ. As a member of the First Baptist Church, she emphasized to her family the importance of a personal relationship with God. The biggest joy in her life was her grandchildren, Seth Calvin Pittman and Amanda Kay Pittman. From spoiling them at Christmas or teaching them how to drive, the greatest thing she ever taught them was how to love others. The bond forged here was stronger than most will ever understand. Holidays and family gatherings will not be the same without Granny's special dishes. Her crispy fried potatoes, mouth-watering corn bread dressing, and her superb pecan pie were some of her family's favorites. Juanee's life had its challenges, like most. In 2010, she was diagnosed with stage 4 cancer, but refused to let it beat her. After a long-fought battle, she was declared cancer free and lived a good life for an additional 12 years. Juanee is survived by her husband, Doc, of the home; her son and daughter in law, Rick and Carol Pittman, of Austin, Texas; stepson, Gary Pittman, of Houston, Texas; grandchildren, Seth Pittman and wife, Elizabeth, of Bedford, Texas and Amanda Pittman, of Midland, Texas; sisters, Laquita Littlebird of Weatherford, Oklahoma and Evaughn Sanders and husband, Jerry of Burleson, Texas and dozens of cousins, nieces, nephews, and extended family. We would be in remiss if we didn't mention all of her Native American sisters. She was preceded in death by her parents, Oma and Harley Jones; an infant son, Kendall Kelvin Pittman; brothers, Billy Jones and Utah Jones; sisters, Harlene Holman, Gay Ann Jones, and Betty Butler. Funeral services: 2:00 p.m. Tuesday, April 26, 2022 at the First Baptist Church, Carnegie, Oklahoma. Burial will follow at the Carnegie Cemetery under the direction of Ray & Martha's Funeral Home. Under the direction of Ray and Martha's Funeral Home, Carnegie, OK Visitation: 1:00 pm - 8:00 pm, Sunday, April 24, 2022 9:00 am - 8:00 pm, Monday, April 25, 2022 Ray and Martha's Funeral Home, Carnegie, OK Funeral: 2:00 pm, Tuesday, April 26, 2022 First Baptist Church, Carnegie, OK Graveside: 3:00 pm, Tuesday, April 26, 2022 Carnegie Cemetery, Carnegie, OK

Juanee (Jones) Pittman was born on November 23, 1939 in Chimes, Arkansas to Harley Clarence Jones and Oma Nola (Holsted) Jones. She was the fourth of eight children. Juanee passed away on Thursday, April 21, 2022 at the Carnegie Hospital. Shortly... View Obituary & Service Information

The family of Juanee Pittman created this Life Tributes page to make it easy to share your memories.