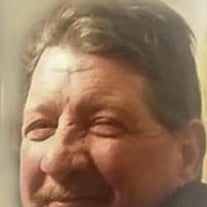 Howard Dwayne Smith Jr. was born May 28, 1962 to Howard Dwayne Smith Sr. and Norma Jean (Cope) Smith in Oklahoma City, OK. He attended school at Rock Spring's High School in Wyoming. Later, he received his GED. He also lived in Duchesne, Utah; Kemerer, Wyoming; Ephraim, Utah. He passed away of an unexpected illness in the early morning of April 9, 2021 at the Physician's Hospital in Anadarko, Oklahoma. He worked most of his life in the oil field industry. He started at the bottom like the rest and worked his way up to Driller. He got married to the love of his life, Gina Wooster on December 21, 2015 in Wichita Falls, Texas. He was proceeded in death by his father, Howard Dwayne Smith Sr. His uncle, Dale Cope. His aunt, Eleanor (Bowling) Miser; his paternal grandparents, Howard Smith and Evelyn Smith; his maternal grandparents, Oren Cope and Nola Cope. He is survived by his wife, Gina Smith of the home. His mother, Norma Jean Russ of St. George, Utah. His uncle, Bob Cope and his wife, Carolyn Cope of Eakly, Oklahoma. His sisters, Debbie Phillips, husband Kevin Phillips of Houston, Texas. Rita Perkins and husband, Lance Perkins of Lyman, Wyoming. His mother-in-law, Sally Wooster of Anadarko, Oklahoma. His sister-in-law, Shelley Wooster of Anadarko, Oklahoma. His brother-in-law, Steven Wooster and wife, Christina Wooster of Binger, Oklahoma. His brother-in-law, Terrell Wooster of Anadarko, Oklahoma. His son, Casey Smith Sr. and wife, CJ Smith of Kalispell, Montana. His daughter, Sarah (Wooster) Klinekole and her companion, Lonnie Klinekole of Gracemont, Oklahoma. His grandchildren, Winter and Casey Smith Jr.; Kierra, Koda, and Kaliyah Klinekole. And a host of nephews, nieces, cousins, and friends. His wish was to be cremated. Due to Covid-19 restrictions, a memorial service will be held at a later date through Zoom. Under the direction of Ray and Martha's Funeral Home

The family of Howard "Dwayne" Smith created this Life Tributes page to make it easy to share your memories.