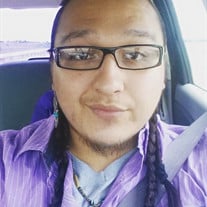 Howard "Catches Up" Round Face Jr., 31, went to the other ide on July 7, 2020; he will be greatly missed by family, friends and co-workers. Howard was born in Billings, MO, on Nov 2, 1988, along with an identical twin brother, Calvin. He moved to Anadarko in 1992 where he attended grade school and middle school. He moved to Phoenix AZ in 2003 and attended Paradise Valley High School. Howard graduated from Anadarko High School in 2007 and later attended Southwest Indian Polytechnic Institute (SIPI) in Albuquerque, NM and Haskell Indian Nations University in Lawrence, KS. He loved visiting with family and spending time with them. The best part of his spirit was a giving heart. Family and friends were drawn to his generosity. Howard worked at Sugar Creek Casino in Hinton as the Players Club Manager from 2014 until his passing. A special moment in his life was that he and his twin brother were extras in the movies Cowboys and Aliens and The Lone Ranger. Howard is survived by his parents, Howard Sr of Pryor MO and Sharlene, of Albuquerque, NM and his five siblings. Identical twin Calvin (and Devin), and brothers Theodore (and Pamela); Andrew and (Sunny) and two sisters, Her Blue Day and Ba eick cha ugh-o (Honey). He had eight nieces and nephews. Howard's paternal grandparents were Calvin "Mickey" Round Face and Julia Spotted Bear Round Face; his maternal grandparents were Joseph Sherry Wallette and Carlene Steele. Howard was proud to be a member of the Greasy Mouth Clan of the Crow Tribe and a Crow Tribal member. He was also descended from the Fort Peck Sioux Tribe and the Mandan/Hidatsa tribe of North Dakota. Howard passed peacefully in his home in Anadarko and was buried in the Round Face Family Cemetery in Pryor, MO, on July 14, 2020. Visitation: 1:00 p.m. ~ 8:00 p.m., Thursday, July 9, 2020 Ray & Martha's Funeral Home Anadarko, Oklahoma Under the direction of Ray & Martha's Funeral Home-Anadarko, OK

Howard "Catches Up" Round Face Jr., 31, went to the other ide on July 7, 2020; he will be greatly missed by family, friends and co-workers. Howard was born in Billings, MO, on Nov 2, 1988, along with an identical twin brother, Calvin. He... View Obituary & Service Information

The family of Howard Dale Round Face, Jr created this Life Tributes page to make it easy to share your memories.