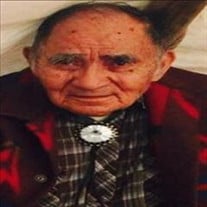 Horace Benward Kaulaity ["Sitting on the Edge of the Moon"] was born December 18, 1927 in Carnegie, Oklahoma in a teepee on Banner Road to Henry Kaulaity (Ahkeahquoquoot) and Alice (Ware) Kaulaity and went to be with his Lord on November 21, 2020. He grew up in the 'Dirty Shame' community south of Carnegie. He graduated from Riverside Indian School, where he was a member of the boxing team. He enlisted in the US Navy after highschool and served until he was honorably discharged. He was an aviation mechanic for Boeing International where he helped work on the Enola Gay, then worked as a machinist at Beauty Craft in Carnegie where he retired then continued to work for Midwest in Carnegie until he retired from there, as well. Horace married the love of his life Doris Jean Aitson on August 19, 1951. Horace was a part of the Native American Church, where his travels took him into Canada and Mexico. He was popular in the NAC for his singing abilities and Kiowa language. Horace enjoyed bead-working, woodworking, powwowing (in his younger days), Kiowa church songs, NAC songs, hand-gaming, and featherwork. He was an enrolled member of the Kiowa tribe. He is survived by one son, Myron Vern Kaulaity from Anadarko, Oklahoma; three sisters, Thelma Bowman of Anadarko, Oklahoma, Gloria Holder of Lawton, Oklahoma, Louella Patterson of Carnegie, Oklahoma; nine grandchildren, Jameson Cole Kaulaity and his wife, Rachel Rose Peery of Ethete, Wyoming, Stefan Dean Kaulaity and his wife, April Kaulaity of Ethete Wyoming, Adreanna Kaulaity Ponce of Shawnee, Oklahoma, Michelle Ann Kaulaity of Tacoma, Washington, Emily Marie Kaulaity of Nespelem, Washington, Alton Keith Kaulaity Jr. of Nespelem, Washington, Curtis Quin Kaulaity Jr. of Anadarko, Oklahoma, Curtis Quin Harjo of Oklahoma, Christy Michelle Kaulaity of Anadarko, Oklahoma; numerous great-grandchildren, nieces, nephews, and other relatives and friends. He has many extended family members of the many Native American church affiliations across Native country. He was preceded in death by his first wife, Doris Jean Kaulaity; second wife, Annabelle (Armstrong) Kaulaity; parents; sons, Curtis Quin Kaulaity, Alton Keith Kaulaity, and Myles Dean Kaulaity; brothers, William Leon Kaulaity, William Witt Kaulaity, Donald Ray Kaulaity, Norman Kaulaity, Thurman Kaulaity, Manfred Vearl Kaulaity, Robert Hickman Kaulaity, Lewis Earl Kaulaity, and Thomas Kaulaity; sisters, Violet May (Kaulaity) Kauley and Anna Domebo. There are no services at this time. Under the direction of Ray and Martha's Funeral Home in Carnegie, Oklahoma.

Horace Benward Kaulaity ["Sitting on the Edge of the Moon"] was born December 18, 1927 in Carnegie, Oklahoma in a teepee on Banner Road to Henry Kaulaity (Ahkeahquoquoot) and Alice (Ware) Kaulaity and went to be with his Lord on November 21,... View Obituary & Service Information

The family of Horace Benward Kaulaity created this Life Tributes page to make it easy to share your memories.

Horace Benward Kaulaity [&quot;Sitting on the Edge of the Moon&quot;] was...