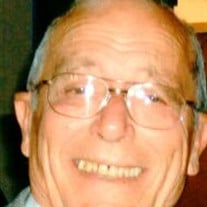 Herman Russell Goodwin passed away Tuesday, April 21, 2020 at his home in Alfalfa, OK. Russell was born June 1, 1942 in Elk City, OK to Orval and Opal Prather Goodwin. Russell attended school in Alfalfa, OK graduating with the Class of 1960. He was voted president and the funniest person in his class that year. He also drove the school bus. Russell then attended Southwestern State College in Weatherford, OK and graduated with a Bachelor's Degree in Math and Physics in May of 1964. Russell went to school with Rita for 10 years at Alfalfa but didn't start dating until 2nd semester in college. They would write during the summers while he was gone to wheat harvest and date on weekends since he didn't have a car to drive back from college. They had a new life just a few days after college; Russell married Rita Kay Montgomery June 2, 1964 in Alfalfa, OK. He immediately went to work for NASA in Houston, Texas as a Research Analyst, with his roommate from college Tommy Weichel. They loaded all their worldly possessions in a new 1964 Chevrolet Impala and drove to Houston. Some of the missions while at NASA he worked on were: Gemini-Titan 3; 4; 6; 8; 10; 11; 12. They lived in an apartment there for 6 months and moved to Friendswood, a small Quaker town, where two sons Eric & Kirby were born. After having them, they felt it would be better to raise them near their own family. He later came home and went to work at Ft. Sill in Lawton, OK as a Research Analyst where he was working when he retired. A good friend Jerry Cotten talked about needing Christ as Savior, and later that year while cultivating cotton on a tractor, Russell got down and asked Christ into his life. Russell was a member of Alfalfa Baptist Church where he dedicated his life to the services to Christ and to anyone that crossed his path. He was a deacon & Usher/greeter there for many years and would always keep everyone laughing. Survivors: Wife, Rita Kay of the home in Alfalfa, OK Two sons, Eric Goodwin and Dayvid Gourd of Sapulpa, OK Kirby Goodwin and Kathy Stewart, Carnegie, OK One Grandchild: Kelby Shane Goodwin One Sister: Nelda Garcia, Eldorado, Kansas Many nieces, nephews, relatives, and friends. Preceded in death by Parents, Sisters, Luella Hermanski, Margaret Erwin, and Alita Lamb. Graveside Service will be Saturday, April 25, 2020, 11:00 AM Alfalfa Cemetery, Alfalfa, OK Viewing: Thursday, April 23, 2020, 9:00 AM - 8:00 PM Friday, April 24, 2020, 9:00 AM - 8:00 PM Ray & Martha's Funeral Home, Carnegie, OK Under the direction of Ray & Martha's Funeral Home, Carnegie, OK

The family of Herman Russell Goodwin created this Life Tributes page to make it easy to share your memories.