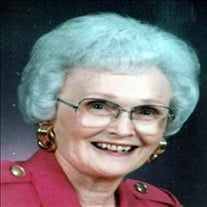 Helen Jayne Ledford, 96, was born on January 24, 1925 to Johnson P. Smith and Rovilla (Turner) Smith in Mountain View, Oklahoma. Helen passed away on January 28, 2021 at Gran Gran's Place in Yukon, Oklahoma. Helen graduated from Carnegie High School with the Class of 1944. Helen married her best friend and love of her life, Ernest W. Ledford, on October 28, 1949 in Lubbock, Texas. Helen was a hairdresser and ran/operated Ledford's Beauty Shop in Mountain View, Oklahoma for twenty-five years. She volunteered at INTEGRIS Canadian Valley Hospital in Yukon, Oklahoma for eleven years. In 2011, she was one of 20 recognized in the state of Oklahoma with the Prestigious Spirit Award. Helen was a member of the First Baptist Church in Yukon, Oklahoma, as well as, a member of the Order of the Eastern Star. In 1978, she was awarded Merit Mother of the Year for the State of Oklahoma. Helen is survived by two sons, Rick Blaske and his wife, Carol of Yukon, Oklahoma, Larry Ledford of Chandler, Oklahoma; one daughter, Janet Lee and her husband, Ted of Yukon, Oklahoma; one daughter-in-law, Cindy Ledford of Carnegie, Oklahoma; grandchildren, Christy Blaske of Sherman, Texas, Kevin Blaske and his wife, Shelly of Mangum, Oklahoma, Jason Lee and his wife, Angela of Yukon, Oklahoma, Juli Vaughan and her husband, Bo of Eagle River, Alaska, Don Coffman and his wife, Leah of Palmer, Alaska, Gayla Reed and her husband, Byron of Durant, Oklahoma, Lacy Little of Carnegie, Oklahoma, Thad Ledford and his wife, Nola of Oklahoma City, Oklahoma; seventeen great-grandchildren. Helen is preceded in death by her husband, Ernest Ledford; parents, Johnson and Rovilla Smith; son, Eddy Ledford; brother, Kenneth Smith; sister, Joyce Miller. In Lieu of flowers donations can be made to Integris Canadian County Hospital Volunteer Auxiliary in Helen Ledford's Memory. Visitation for Helen is on Saturday, January 30, 2021 from 10:00am-8:00pm and Sunday, January 31, 2021 from 1:00pm-8:00pm. Graveside services for Helen will be on Monday, February 2, 2021 at Mountain View Cemetery in Mountain View, Oklahoma. Officiating will be Rev. Clark Wrather. Under the direction of Ray and Martha's Funeral Home in Mountain View, Oklahoma.

The family of Helen J. Ledford created this Life Tributes page to make it easy to share your memories.