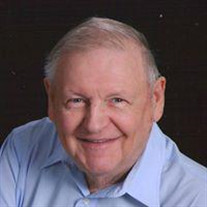 Harmon Gordon Dowdy peacefully left this Earth on May 10, 2019, joining his beloved wife LaQueta Sue Dowdy in their final resting please in heaven. Gordon was a devoted husband and father who worked to provide for his family and who celebrated his faith. He also was a proud "Old Okie" who loved his Oklahoma Sooners! While we mourn Gordon's death, we rejoice that he is with his Lord and Savior. Gordon was born on October 3, 1934 in Cordell, Oklahoma to Ira Dowdy and Amy Dowdy (Holcombe). Gordon grew up in Cordell, Oklahoma, where he learned his love of Country, God and the joy of flying. He worked at the Cordell Municipal Airport, where he took an interest in aviation and learned to fly. Gordon would have a huge grin when he described the feeling of flying over Cordell and the surrounding area, and "buzzing" his house on his way towards landing back at the airport. He attended local schools in Cordelland later studied electronics at Southwestern Oklahoma State University in Weatherford, OK and at Oklahoma City University. Gordon married LaQueta Sue Dowdy in 1955,and later moved to Tulsa, OK. He worked as a Manufacturing Section Manager for Seiscor Technologies in Tulsa, OK. Gordon's responsibilities were many, and he was respected as a firm but fair leader. In the mid-1980's Seiscor merged nine separate manufacturing plants and Gordon took the opportunity to retire in1987 at the age of 52 years old. In his retirement, Gordon immediately honed his woodworking skills. His creations include birdhouses, clocks, Christmas displays and toys. One of his greatest joys in retirement was making and adapting toys for children at The Little Lighthouse, a faith-based preschool serving children with special needs. In 2001 Gordon & LaQueta moved to Bakersfield, California to be close to their daughter and grandchildren. Gordon and LaQueta immediately made a lot of friends through their association with Valley Baptist Church. Gordon would regularly make copies of the Sunday School service to share with those who could not attend. Gordon had many talents and interests. He could fix almost anything, especially all things electronic. He was an avid computer user even before computers became popular. He loved his cats and the sounds of Southern Gospel Quartets. Gordon loved his family, and he relished the challenge of researching the Dowdy Family Tree. Gordon had health challenges over the past five years, yet that did not impact his love of e-mail! Gordon was a prolific e-mailer who loved to share jokes and political commentary. He received excellent care in the final months of his life and was fortunate to be with LaQueta, the love of his life. Gordon is survived by his daughter DeAnne (Dowdy) Sanders and his son-in-law Stephen Sanders, his beloved grandchildren Tara Sanders and Rachel Sanders, his niece Beverly (Charles) Smith, his grandnieces Amy Griffith (Karl) and Elizabeth Smith, his grandnephew David Smith, several great-grandnieces and great-grandnephews and many cousins. He was preceded in death by his parents Ira and Amy Dowdy, his sister Ira Dean Botchlet (Dowdy) and Coy Botchlet. Gordon has joined LaQueta in the embrace of their Lord Jesus Christ and for that we celebrate. The family would like to thank the loving care provided by the Optimal Hospice Care Team, David Johnson, Anne McClean and the Paradise Gardens family. A graveside service will be held Thursday, May 23, 2019 in Cordell, Oklahoma. A reception in Bakersfield will follow at a time and place to be determined. "Do not let your hearts be troubled. You believe in God; believe also in me. My Father's house has many rooms; if that were not so, would I have told you that I am going there to prepare a place for you?" John 14: 1-2

Harmon Gordon Dowdy peacefully left this Earth on May 10, 2019, joining his beloved wife LaQueta Sue Dowdy in their final resting please in heaven. Gordon was a devoted husband and father who worked to provide for his family and who celebrated... View Obituary & Service Information

The family of Harmon Gordon Dowdy created this Life Tributes page to make it easy to share your memories.