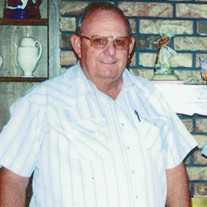 Guy Arlen Vickery was born on January 20, 1944 in Hobart, Oklahoma to R.O. "Cap" and Lois Vickery of Gotebo, Oklahoma. Arlen passed away Saturday, September 22, 2018 at Elkview General Hospital in Hobart. Arlen is survived by his wife Ann of the home, a son Ron Vickery and daughter-in-law Stephanie of Lawton, Oklahoma, Two grandchildren; Austin Vickery and Lori Martinez, both of Lawton, Oklahoma, and a sister Kay Owens of Henniker, New Hampshire and nieces and nephews. He is preceded in death by an infant daughter and grandson; Cameron Vickery; His mother and father and 6 brothers Orland Vickery, Bob Vickery, Don Vickery, Bill Vickery, Roy Vickery, and Gary Vickery. Arlen was raised on a farm northwest of Gotebo. Growing up he and his brothers farmed and operated a dairy. While working on the farm he had honed his skills in dirt work. After graduating high school in Gotebo, He started working in construction and was later drafted in the U.S. Army and then later was transferred to the Oklahoma Army National Guard. He continued to work in construction helping built I35, I-40, and Indian Nation. During this time he had met and married Ann in May, 11, 1966 in Cordell, Oklahoma. Later on Arlen and Ann had moved to Gotebo where he owned a trucking company, a dirt service company, and a steam cleaning company. He then went to work for Kiowa County District 3 for 10 years and then later became Kiowa County District 1 commissioner for 2 terms until retirement. After he retired Arlen and Ann moved to Hobart where Arlen started an oil field company. He was lifetime member of the Church of Christ which had attended churches in Gotebo, Mountain View, and then Hobart whom had served as a Deacon at the Mountain View Church of Christ. Arlen was a devoted Christian, Husband, Father, and Grandfather. He was instilled with integrity and conducted both his personal and business duties as such and left a legacy as an example for the rest of the family to follow. He was passionate about overseeing and taking care of the elderly his whole life and also was a business minded man whom could communicate with everyone he met. Arlen never met a stranger no matter where he was and had a sense of humor whom he loved giving friends a hard time in a loving manner. He loved his family and friends. He will be greatly missed by his family. Visitation: 9:00 a.m., ~ 8:00 p.m., Tuesday, September 25, 2018 Family welcoming guest from 6:00 p.m. ~ 8:00 p.m. Ray & Martha's Funeral Home, Hobart, Oklahoma Funeral Service: 2:00 p.m., Wednesday, September 26, 2018 Church of Christ Hobart, Oklahoma Interment: Hobart Rose Cemetery Hobart, Oklahoma

Guy Arlen Vickery was born on January 20, 1944 in Hobart, Oklahoma to R.O. "Cap" and Lois Vickery of Gotebo, Oklahoma. Arlen passed away Saturday, September 22, 2018 at Elkview General Hospital in Hobart. Arlen is survived by his wife Ann of... View Obituary & Service Information

The family of Guy Arlen Vickery created this Life Tributes page to make it easy to share your memories.