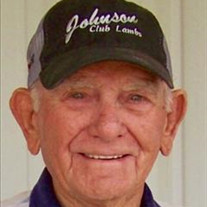 Weldon Johnson, 93, of Gotebo, Oklahoma passed peacefully with family by his side on May 4, 2019 in Corn, Oklahoma. He was born on August 23, 1925 to Chris and Merle Elizabeth (White) Johnson in Cooperton, Oklahoma where he was raised and attended school. After school, he went to work for his dad at Johnson's Apco Filling Station, also in Cooperton. On August 28, 1943, Weldon married his high school sweetheart, Peggy, and they spent the next 68 years working diligently to provide a great life for their family. Weldon was baptized into the First Christian Church in Cooperton on February 12, 1956. Weldon served two years in the United States Army before returning to Cooperton and starting his career as a Rock Truck Driver. During this time, he raised Southdown club lambs with Bradley and later switched to Suffolk club lambs with Karen. One of the highlights of his career was having the first ever Grand Champion at a major show with a Suffolk lamb. Weldon stayed active in the sheep industry throughout his life and was inducted into the United Suffolk Sheep Association Hall of Fame in 2017. In 1983, after retiring from trucking, Weldon began carving ducks as a hobby but as the years passed his passion, perfectionism and artistic talent led him into instructing others in the craft of carving. He won numerous awards over the years and was honored by having some of his carvings displayed at the Governor's Art Gallery at the Oklahoma State Capitol in 1985. Weldon loved dancing. He and Peggy spent nearly every weekend at a dance. A highlight for them was dancing on TV in Nashville on their 50th anniversary and he even chose a dance party for his 90th birthday celebration. Weldon's philosophy was "Work Hard, Play Hard...but work always comes first!". Weldon was a jokester and loved making people laugh, but most of all he loved his family. He had a knack for instilling great confidence in them which taught them they could succeed at all endeavors. Weldon was a great Dad and Grandad and will be deeply missed by all who knew and loved him. Survivors include: Daughter: Karen Mason & husband Jim of Gotebo, OK Daughter-In-Law: Sue Johnson of Gotebo, OK Grandson: Brian Johnson & wife Misty of Gotebo, OK Granddaughter: Kristin Harwell & husband Steve of Mangum, OK Great Grandchildren: Trevor Johnson & wife Calyn of Gotebo, OK Trenton Julian of Gotebo, OK Kamden Urban of Gotebo, OK Kailen Urban of Gotebo, OK Jesse Harwell of Mangum, OK Carrie Harwell of Mangum, OK Great-Great Granddaughter: Baylor Johnson of Gotebo, OK Sisters: Loretta Lindsey & husband Marvin of Porter, OK Leta Baker of Lubbock, TX Wanda Simmons of Roosevelt, OK Brothers: Bud Johnson of Alex, OK Donnie Johnson & wife Linda of Cordell, OK Sister-In-Law: Peggy Johnson of Mountain View, OK Numerous nieces and nephews Preceded in death by his Parents: Chris and Merle Elizabeth Johnson, Wife: Peggy Johnson, Infant Daughter: Patricia Johnson, Son: Bradley Johnson, Grandson: Jason Hestand, Great Grandson: Tucker Johnson, Sister: Alta Fern Haskins and Brother: Sonny Johnson, Brothers-In-Law: Case Haskins, Kenneth Baker and Donald Simmons, Niece: Carla Douglas, Nephew: Rusty Johnson. Funeral: 1:30 p.m., Tuesday, May 7, 2019 First Baptist Church Gotebo, Oklahoma Burial: Hobart Rose Cemetery Under the direction of Ray & Martha's Funeral Home, Hobart, Oklahoma.

Weldon Johnson, 93, of Gotebo, Oklahoma passed peacefully with family by his side on May 4, 2019 in Corn, Oklahoma. He was born on August 23, 1925 to Chris and Merle Elizabeth (White) Johnson in Cooperton, Oklahoma where he was raised and attended... View Obituary & Service Information

The family of Glenn Weldon Johnson created this Life Tributes page to make it easy to share your memories.