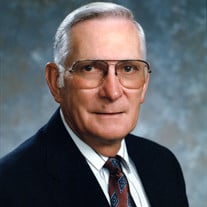 Gerald Ross Jantz, known to friends and family as Ross passed away peacefully on September 5, 2020 in McKinney, Texas. Ross was born on May 21, 1931 in Alden, Oklahoma, the son of Sam and Emma Jantz. He was the sixth of nine children, surviving him is Winifred Koehn of Halstead, Kansas. Preceding him in death is a sister Betty Ann Jantz and brothers LaVern, Milton, Willard, Robert, Richard and Eldon. Ross grew up south of Carnegie, Oklahoma on a rural farm near Alden, Oklahoma where he attended high school and played varsity sports in basketball and baseball, graduating in 1949. After high school he attended Junior college and soon thereafter met Patricia Dyer whom he married on May 14, 1952. In 2020 Ross and Patricia celebrated 68 years of marriage. Ross and Pat have two children, Brenda Johnston of Frisco, Texas and Keith Jantz of Prosper, Texas. Their family also includes a daughter-in-law Maureen Jantz, granddaughter and son -in-law Ellen and Aaron Steensma and a great granddaughter Grace Steensma. Originally working on farms in Oklahoma, Ross and Pat moved to San Diego, California where he worked as an electrical technician before joining IBM in 1957. His career with IBM lasted 36 years and included various levels of management and twice he was awarded "National Manager of the Year". After retirement Ross spent time with volunteer work, he taught people how to use computers, was chairman of the local SCORE chapter (Senior Corps of Retired Executives) and he volunteered at the local library. In his retirement years he had time to pursue his hobby of playing golf. Throughout his life Ross always had time to honor God with his time, service, talents, and tithes. His belief that Jesus Christ is the Son of God as stated in John 3:16 was evident in his life both in the spot light and at home. Without being famous he was a pillar in the community wherever he lived. Survivors include: Pat Jantz (Spouse) Plano, Texas Brenda Johnston (daughter) Frisco, Texas Keith and Maureen Jantz (son and daughter-in-law) Prosper, Texas Aaron and Ellen Steensma (son-in-law and granddaughter) Gunter, Texas Grace Steensma (great granddaughter) Gunter, Texas Memorial Donations can be made to: The Gideons International https://www.gideons.org Greenfield Cemetery Fund C/O R. Nightingale 7057 County Road 1380 Carnegie, Oklahoma 73015

Gerald Ross Jantz, known to friends and family as Ross passed away peacefully on September 5, 2020 in McKinney, Texas. Ross was born on May 21, 1931 in Alden, Oklahoma, the son of Sam and Emma Jantz. He was the sixth of nine children, surviving... View Obituary & Service Information

The family of Gerald Ross Jantz created this Life Tributes page to make it easy to share your memories.