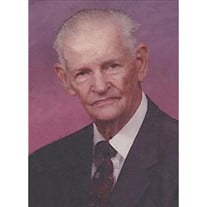 George Ray Broadhurst was born on the family farm near Sentinel, Oklahoma on April 18th, 1923. His parents were G. Vernon Broadhurst and Ileta Bromley Broadhurst. Ray's siblings were Maggie Louise, Glen Charles, and James Elbert Broadhurst. Ray attended Sentinel schools and graduated from high school in 1942. During World War II, he served with the 175th Ordinance Depot Company assigned to the United States 5th Army Air Force. Ray was in Australia, New Guinea, and the Philippines. He returned home on January 18, 1946. Ray married Wanda Inez Carney on May 14, 1946, and she preceded him in death in 2007. He later married Grace Irene Ellis on April 12, 2008 in Sentinel, Oklahoma, and they made their home in Rocky, Oklahoma. She preceded him in death December 28, 2015. Ray was a farmer, carpenter, and painter for many years in the Sentinel and Rocky area. He also enjoyed growing a garden. Ray was a member of Sentinel Northeast Church of Christ, American Legion, and Veterans of Foreign Wars. He has been a resident of Cordell Christian Home since May 2015. Ray was preceded in death by his parents, wife Inez, wife Grace, sister Maggie Louise, brothers Glen Charles and James Elbert, and step-son David Wesley Ellis. He is survived by a host of other family members and friends. In lieu of flowers, donations can be made to : Westview Boys Home 120 W. Broadway Hollis, Oklahoma 73550 Graveside Service: 2:00 p.m., Friday, October 13, 2017 Sentinel Cemetery Sentinel, Oklahoma Services are under the direction of Ray & Martha's Funeral Home, Sentinel, Oklahoma.

The family of George Ray Broadhurst created this Life Tributes page to make it easy to share your memories.

George Ray Broadhurst was born on the family farm near Sentinel,...