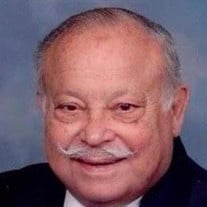 Geatano Paul "Tom" Richichi March 31, 1934-December 19, 2020 Tom Richichi passed away in the morning of December 19, 2020. He had been suffering from vascular dementia for several years. Tom was born on March 31, 1934 in Brooklyn, New York. He would comment to his children how he had to walk to school "uphill both ways." He graduated high school and started at Manhattan College but left school to join the Air Force in 1952. He eventually became a Major in the Air Force and was a veteran of the Korean and Vietnam Wars, having served as a navigator for cargo missions in both. It was also in 1952 that he met his beloved wife Rosemarie. They wed on October 3, 1955 and were married for nearly 40 years. In the Air Force Tom was stationed in many places including Plattsburgh, NY; Topeka and Salina, Kansas; Little Rock, Arkansas; and Nashville, Tennessee. It was while stationed in these places that his sons Paul, Stephen, Peter and James were born. His son James passed away shortly after birth. In 1969 Tom retired from the Air Force and started working for the Federal Aviation Administration as a flight service specialist. The family moved to Brentwood, NY. Their son Peter died suddenly and tragically a few months before their son Michael was born. In Brentwood Tom was also reunited with his parents and siblings; his children, nieces and nephews all have fond memories of extended family dinners there. Shortly after moving to Brentwood Tom and his wife also adopted their daughter Joanne from Korea, who brought much joy to their and her brothers' lives. While living in Brentwood Tom and Rosemarie started a ceramics studio in the basement of their home, with Tom pouring and firing the molds and Rosemarie teaching painting and decorating classes. During this time Tom finished his bachelor's degree in Mass Communication from Adelphi University. In the summer of 1972, the family spent the summer in Oklahoma City while Tom attended FAA training. After nine years in Brentwood Tom took an opportunity to work as an instructor for the FAA in Oklahoma City and moved his family (Paul, Stephen, Michael, and Joanne) there. When Paul graduated from high school he settled there while the rest of the family moved to Hamilton, Virginia two years later for Tom's new job. Stephen graduated high school and started college at Virginia Tech. Three years later the family transferred to Millville, New Jersey, where Michael went to and graduated high school. Tom, Rosemarie, and Joanne then moved to Grand Forks, North Dakota, while Michael stayed behind in New Jersey to attend Drew University. After two years in Grand Forks Tom retired from the FAA and moved back to Oklahoma City, working again as an FAA instructor, this time at the University of Oklahoma. They lived near his son Paul and his new grandchildren. A few years later Stephen moved to Oklahoma to get his Ph.D. in physics. When Rosemarie died in 1995, Tom lived by himself for several years, and sometimes with Stephen while he was going to school. His days were again filled with big family dinners; this time as the patriarch surrounded by his children and grandchildren (Paul, Stephen and Joanne, with Michael and his wife Sherryl when they visited from New Jersey). Tom relished the role of patriarch, taking on the name "Poppa" and "G-Pop" to his grandchildren and great-grandchildren respectively. Tom was very active in his faith, and a vital member of St. Joseph's parish in Norman, Oklahoma for the last 30 years of his life, serving as a eucharistic minister, lector, usher and in other volunteer roles frequently along with his son Stephen. He also served as Grand Knight of the Knights of Columbus chapter of the church as well as an officer in the statewide Knights of Columbus organization. He earned a degree in pastoral ministry later in life to further enrich his faith. In earlier years, he was active in his children's lives as well, frequently taking on the role of coach, Scoutmaster, and volunteer for their activities, and always providing support and encouragement in any way he could. Tom also loved the space program, science, and talking politics, always striving to reconcile science and religion. His professional experience in the FAA made him an enthusiast weatherman, even teaching weather to his son's classes in school, and working as a weather radio announcer. Taking after his own father, he was also an inveterate tinkerer and gadget hound. He had no fear about taking something apart and trying to fix it, and sometimes he was even successful. He also was a brilliant cook and enjoyed duplicating meals he would eat in restaurants, frequently serving filet mignon and French onion soup to his family. He also loved cooking for his church and even his co workers, making Chinese stir-fry for the night shift at the FAA. Sadly, Tom's life was also marked with tragedies, including his wife having several miscarriages and the loss of his sons James and Peter before ultimately losing Rosemary too soon. On July 24th, 2020 he suffered the loss of his daughter Joanne to COVID-19 and his son Stephen to a heart attack two days later. While the last few years of his life were also marked by the increased effects of his dementia, he was always buoyed by his faith and by spending time sharing meals with his family. Tom is predeceased by his parents, Lucia and Paul; his sons James, Peter, and Stephen; his wife Rosemarie, and daughter Joanne. He is survived by his sons Paul (Catherine) and Michael (Sherryl McBride), his brother Peter (Ann), and sisters Constance Van Cura (Walter) and Victoria Grobe (William). He is also survived by his many grandchildren, nephews and nieces, and great-grandchildren.

The family of Geatano Paul Richichi created this Life Tributes page to make it easy to share your memories.