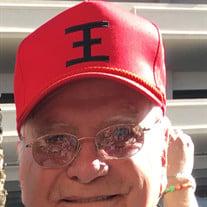 Gale Edward Evans has passed into the other world on December 9, 2021. Born February 24, 1941 to I.L and Ozella Smith Evans of the Cloud Chief/Cowden area. He was the oldest of five children. He attended Cowden and Washita Heights schools, graduating in 1959. He and his wife, Rita Edingfield Evans made their home in Carnegie, Oklahoma and had two children, Cary and Anita. A hard and dedicated worker known for working at the Farmers Coop elevator as assistant manager, the manager at the Carnegie Coop Gin and the manager of the Blair Elevator and Gin until 1980 when he and Rita purchased Mac's Quick Mart in Apache Oklahoma. In 1993, Gale was elected Caddo County commissioner for District 3 and retired in 2003. Gale spent his retirement years, sitting in the coffee shop and driving around the rural parts of western Oklahoma with the raised finger wave and a chuckle and joke, while watching the wheat grow. If you knew Gale he always had a joke to tell or a button to push. He is survived by his son Cary (Oklahoma City) and granddaughter Katy Jones (and great granddaughter, Agatha Jones (Knoxville TN). His daughter Anita and Daniel Micek (Las Vegas, NV) and granddaughter, Megli Micek, (Annapolis, MD). Papa Gale loved his granddaughters with all of his heart. Gale is also survived by his siblings, Gene Evans, Patsy Curry, and Barbara Zahourek. He is preceded in death by his wife Rita, parents Lavern and Ozella, and brother Donnie. A memorial service will be held at the Cowden Community Center on Wednesday December 29, 2021 at 11am and the family invites you to attend to share stories and memories of their father and grandfather. In lieu of flowers donations can be made to the Carnegie Food Pantry, PO Box 601 Carnegie, OK 73015. Gale will be laid to rest at a later date on the HOMEPLACE.

Gale Edward Evans has passed into the other world on December 9, 2021. Born February 24, 1941 to I.L and Ozella Smith Evans of the Cloud Chief/Cowden area. He was the oldest of five children. He attended Cowden and Washita Heights schools,... View Obituary & Service Information

The family of Gale Edward Evans created this Life Tributes page to make it easy to share your memories.

Gale Edward Evans has passed into the other world on December...