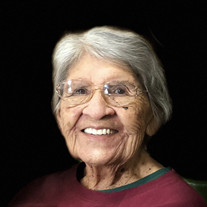 Florene Whitehorse Taylor was born at the Whitehorse homeplace west of Anadarko, Oklahoma November 12, 1928 and left to her heavenly home December 6, 2020. Her Kiowa Name in English translate to Two Killed. She was preceded in death by her parents, Charlie and Laura Whitehorse; her brothers Claude, Roland and Mathew Whitehorse; her sister Anna Sue Nimsey and her husband Walter O. Taylor. Florene was a member of the Kiowa Tribe of Oklahoma; the Kiowa O-ho-mah Lodge, and the Kiowa Black Leggings Women's Auxiliary. Florene was Roman Catholic and volunteer worker at the St. Patrick's Indian Mission School. She is a member of the St. Patrick's Parish and Church in Anadarko, Oklahoma. She made a pilgrimage to the Vatican in 1988. Florene went to school at Riverside Indian School. She earned her GED and received an Associate of Arts degree from the Indian Art Institute, Santa Fe, New Mexico. She received her Bachelor of Arts degree from the College of Santa Fe. She worked for many years for and retired from the BIA Indian School System as an Educational Aid in numerous locations including Oklahoma, New Mexico and Arizona. Upon completing her Bachelor's degree in Studio Art, she received an internship at the National Museum of the American Indian in Washington, DC. Florene made numerous presentations throughout her life on Kiowa Culture and the Kiowa Language. Florene was a proud Kiowa, who spoke Kiowa fluently. It was her first language. She loved to sing Kiowa songs and to listen to traditional Indian music whenever she could. She devoted a great deal of her time and energy to preserving and promoting Kiowa Culture. Florene is survived by her daughter, Theresa Taylor, her sons, Thomas Taylor, Terry Taylor and Tim Taylor; her little brother, Jonathan Windyboy; her sister, Dorothy DeLaune; five grandchildren, Gandra Lovell, Theron Kauley, Tisa Taylor, Eliot Kauley and Stephanie Taylor and five great grandchildren, Shelby Lovell, Madison Lovell, Harley Lovell, Arianna Taylor and Aaron J. Kauley. Private Funeral Services will be at the St. Patrick's Catholic Church with interment to follow at Memory Lanes, Anadarko, Oklahoma. Under the direction of Ray and Martha's Funeral Home, Anadarko, OK

Florene Whitehorse Taylor was born at the Whitehorse homeplace west of Anadarko, Oklahoma November 12, 1928 and left to her heavenly home December 6, 2020. Her Kiowa Name in English translate to Two Killed. She was preceded in death by her parents,... View Obituary & Service Information

The family of Florene Joyce Whitehorse Taylor created this Life Tributes page to make it easy to share your memories.