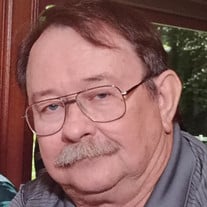 Gene Jorgensen, 72, died November 15, 2020, peacefully at his home in Cordell, Oklahoma. Gene was born on December 12, 1948, in Clintonville, Wisconsin. Gene's family moved to McAlester, Oklahoma, and then later to Midwest City where Gene graduated from Midwest City High School. Gene joined the Navy and was stationed at Guantanamo Bay, Cuba. He later worked for many years as a machinist at Tinker Air Force Base. Gene married Aleta Chenyworth on June 9, 1988. He always called Aleta "the love of his life" and was a loving stepfather to Aleta's five children. Gene loved family dearly. He also enjoyed guns and old cars, and he looked forward to attending Jim Evett's Sunday school class each week at the Bible M.B. Church. Gene was a generous man and a friend to all. After his retirement, he decided to take a job as a Walmart greeter in Weatherford, OK, so that he could talk to and encourage people. Gene is survived by his wife, Aleta Chenyworth Jorgensen, of Cordell, and his beloved stepchildren: Alayna Leppke and husband, Larry, of Corn, OK; Christina Newton of Minneapolis, MN; Mike Newton and wife Shannon of Tulsa, OK; Kyla Ford and husband Jay of Enid, OK; and Evan Gaeddert of Austin, TX; his beloved grandchildren Nic Leppke, Juliana Olson, and Morgan Leppke; his sister Kathy Stephenaskie and husband Mike of Albuquerque, NM, and his favorite niece and nephew, Shelly Wolz and Michael Stphenaskie. Gene was preceded in death by his parents, Travis and Marcy Jorgensen, and his brother, Gerald Jorgensen. Funeral services for Gene will be held at the Bible M.B. Church in Cordell on Friday, November 20, at 2:00 p.m. with arrangements at Ray and Martha's Funeral Home.

The family of Eugene Clyde Jorgensen created this Life Tributes page to make it easy to share your memories.