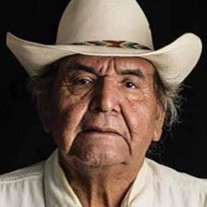 Ernest Hyde Toppah "Iron" was born to Edgar Cheevers Toppah and Esther Lonewolf Toppah on December 29, 1936 at Lawton Indian Hospital, Lawton, OK and passed away on May 26, 2020 in Carnegie, OK with family by his side. Ernest attended Carnegie Public School until the 7th grade and then transferred on to Riverside Indian School and graduated with the Class of 1955. After highschool he went to Haskell where he met the love of his life and was later married. They moved to Chilocco Indian School where they worked and raised their 3 children, Skip, Teri, and Dawn. After he retired from Chilocco they moved to Red Rock and spent many years in Otoe Country before moving back home to Carnegie, OK where they made their home. Ernest worked at the Kiowa Tribe Complex and was a former Kiowa Museum Director, and founding board member of the Jacobson House Native Art Center which he was very proud of. He was a fluent Kiowa Language speaker and was a mentor in the Kiowa Language and Culture Revitalization Program. He was given an Indian name "Daw Thoe Yah" which means "Goes around singing", by his Aunt Geroldyn Davis. He sang for various pow wows, churches, and organizations. He had the honor of serving many times as Head Singer. He never turned anyone or occasion down. He said he was told by his mom years ago to "always help and to never turn anyone away, but help them". That's what he lived by. He enjoyed traveling to handgames and pow wows with the people he called "the crew", Aaron Jones, Lucky Lucero, Bummis, B.A., Sidney. He was a member of the Botone United Methodist Church and attended faithfully. He was always willing to help teach the language, history, songs, & hymns to all who asked and wanted to learn. He is survived by his children: Son, Skip Toppah, Red Rock, OK and his children Brady, Reggie, and Lorena Jo. Daughter, Teri Toppah, Carnegie, OK and her children, Ila Toppah and James "Oaks" Hainta, Carnegie, OK, Carla Toppah Whitewolf and husband C.C. Whitewolf, Gracemont, OK, Tony Toppah and Taveah Cozad, Anadarko, OK. Daughter, Dawn Toppah Landon and husband Alan Landon, Norman, OK and children, Mariah Parker and Daniel Sneed, Norman, OK, Torrel and Ariana, Norman, OK. 14 Great Grandchildren, Heidi, Jaimen, Owen Jace, Jraden, Niya, Jordan, Vivian, Georgia, George Jr., Vailee, Deverick Iron, Draven, Quinlee, and James Daniel. Sister, Ada Lorene Toppah, Chickasha, OK Numerous family, friends, and many other relatives, and fellow singers he shared the drum with, too many to name. Preceded in Death by his loving wife of 60 years, Melba DeRoin Toppah, parents, and Naomi Toppah, Ila Francis Toppah, Simon Toppah, Lindy Toppah, D.K. Toppah, Ruth Moore, and Carol "Squaggs" Toppah, grandson Sean Delos Toppah, great grandson, Jonavon Hainta. Wake Service: Friday, May 29, 2020, 7:00 PM, Botone United Methodist Church, Carnegie, OK Graveside Service: Saturday, May 30, 2020, 1:00 PM, Otoe-Missouri Tribal Cemetery, Red Rock, OK Under the direction of Ray & Martha's Funeral Home, Carnegie, OK

Ernest Hyde Toppah "Iron" was born to Edgar Cheevers Toppah and Esther Lonewolf Toppah on December 29, 1936 at Lawton Indian Hospital, Lawton, OK and passed away on May 26, 2020 in Carnegie, OK with family by his side. Ernest attended Carnegie... View Obituary & Service Information

The family of Ernest Hyde Toppah created this Life Tributes page to make it easy to share your memories.