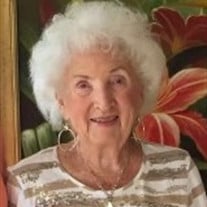 Ellen Faye Jones passed away on January 7, 2021, after a blessed 99 years of life. She was preceded in death by her husband, Dr. Stephen Tisdal Jones, and siblings Era, Lelon, Marie, Jessie, and Mary Ethel. She is survived by her sister, Doris Hales, two daughters, Tisa Wiens and Teri Burnett, and three granddaughters, Jennifer Clutter, Carissa Gariss and Chelsea Vigil. She is also survived by five great-grandchildren, Stephen who is named after his great-grandfather, David, Dustin, Isaiah and Lukas. Ellen was born on December 11th, 1921, to parents, Luke Daniel and Hattie Jones-Daniel in Walters, Oklahoma. Ellen went to work at Fort Sill Air Force Base when WWII broke out. During this time, she got her pilot's license, something she was very proud of. Her sister, Doris, recalls that after Ellen went to work at Fort Sill, Ellen was blessed with an income that allowed her to joyfully share with her parents and siblings. Doris also recalls that being 10 years younger than Ellen, she learned to tell time by watching the clock waiting for Ellen to come home from school. In 1948, Ellen moved to Cordell where she got a job working for Rural Electric Association. She met Tisdal not long after moving to Cordell. Ellen loved to tell the story of Tisdal asking one day while working at Thornton's Drugstore, if he could help her with anything and she asked if he "had anything for homesickness". That started the love story of Tis and Ellen, and they were married shortly after this, on July 25th, 1949 in Cordell. Tisdal and Ellen honeymooned in Creede, Colorado, where Tisdal had vacationed with his parents most of his life. While living in Cordell, Ellen assisted in Tisdal's medical clinic. Additionally, the couple was very active in the community, were proud supporters of the Republican Party, active members of the Methodist Church, belonged to the local bowling leagues and hosted many bridge parties. They were avid Sooner fans and attended football games as often as they could. Tis and Ellen anxiously looked forward to their annual two-week vacations to Creede. Because of the couple's love of Creede, they moved there in the mid-1970s. During their time in Creede, they loved to snow-ski, fly fish, and entertain their beloved Oklahoma visitors. While in Creede, they also opened the Mineral County Health Clinic, where Tisdal perfected his skill at removing fishing hooks from various body parts, and Ellen assisted in minor surgeries, insurance billing and greeting patients that Tis and Ellen grew to love. In 1983, due to the high altitude in Creede, they moved to Sun City, Arizona where they continued their active lifestyle by golfing, dancing and playing tennis. They were active members of the United Methodist Church in Sun City. After Tisdal's death in 1988, Ellen remained active in the Sun City community. She volunteered with Meals-on-Wheels, served on the communion committee at her church, attended bi-weekly aerobics classes and took ballroom dancing lessons. In 2008, Ellen moved to Albuquerque, New Mexico, to live with Tisa. In Albuquerque, Ellen and Tisa, enjoyed going dancing at the local country dance palace, attending Calvary Church, and going to lunch and shopping. She also loved her annual trips with Teri and Tisa to warm and sunny locales including six trips to Maui and trips to Huntington Beach, San Diego, and Laguna Beach, California. Ellen will be remembered for her devotion and love of her family, love of sports, quick wit, great generosity, honesty and impeccable fashion sense. Ellen's Memorial Service and a true celebration of her life will be held on Friday, January 15th, 2021 at 1:00pm at the Lawnview Cemetery

Ellen Faye Jones passed away on January 7, 2021, after a blessed 99 years of life. She was preceded in death by her husband, Dr. Stephen Tisdal Jones, and siblings Era, Lelon, Marie, Jessie, and Mary Ethel. She is survived by her sister, Doris... View Obituary & Service Information

The family of Ellen Jones created this Life Tributes page to make it easy to share your memories.