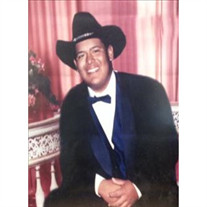 Edgar Orlando Silva, 27, of Sentinel, Oklahoma, passed away February 13, 2018. He was born on August 27, 1990 in Hobart, Oklahoma to Rudy and Yolanda (Hernandez) Silva. He graduated from Sentinel High School in 2009. He worked for Rockwater... View Obituary & Service Information

The family of Edgar Silva created this Life Tributes page to make it easy to share your memories.