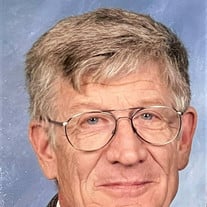 Edwin Perry Scheller was born December 21, 1944, in Frederick, Oklahoma to Goldie Ellen and Otto William Scheller. He passed away August 11, 2021, at the age of 76 years, 7 months and 20 days. Eddie grew up in Frederick where he attended school and enjoyed playing all sports. After graduation he joined the Army National Guard and was stationed in Fort Leonard Wood, Missouri. When he returned home, he married Joy Dell Goodwin of Berlin, Oklahoma. They made their first home in Mangum where Eddie worked for United Supermarket and Joy Dell was the County Extension Home Economist. They both were transferred to Sayre where they continued to live and raise their family. They purchased the Ben Franklin Store in 1974 and continued ownership until January 2000. They moved their business downtown to a smaller location until time to retire in July of 2009 when they moved to Cordell. Eddie was a member of the Sayre and Cordell United Methodist Churches, Sayre Chamber of Commerce, Lions Club, All Sports Club and also served on the Sayre City Council and Cordell Planning and Zoning Committee. He enjoyed serving on committees and being active in his community and serving his Lord. His favorite thing of all time was attending all sporting events especially basketball, football, baseball and most recently following his granddaughter in her softball path. He also found pleasure in working in his yard, gardening, and loved to fish. Eddie was preceded in death by his parents, 1 brother and 3 sisters. He is survived by his wife: Joy Dell, Daughter: Gina Thain and husband David, and son Robert Scheller. Grandchildren: Maci Thain, Kylie Scheller, Tori Scheller, Great granddaughter: Tillie Scheller and bonus grandchildren Alex, Alexsis and Dayton Thain. Along with two brothers: Jerry and Mike Scheller of Seminole. Funeral: 2:00 p.m., Sunday, August 15, 2021 United Methodist Church Cordell, Oklahoma Interment: Berlin Cemetery Berlin, Oklahoma

Edwin Perry Scheller was born December 21, 1944, in Frederick, Oklahoma to Goldie Ellen and Otto William Scheller. He passed away August 11, 2021, at the age of 76 years, 7 months and 20 days. Eddie grew up in Frederick where he attended school... View Obituary & Service Information

The family of Edwin Scheller created this Life Tributes page to make it easy to share your memories.